A Flash-y sacrifice. Is there some tradition of offing one of the Flashes when a “final,” cataclysmic event (crisis?) occurs? Kid Flas is an alright choice as I couldn’t think of an alternative character to rid from the show.

And now the Aura of Angst can now be removed from Jaime Reyes! He should feel like a hero after he and his Scarab defeated Black Beetle. Unfortunately, Green Beetle had to suffer before Jaime stepped in.

Aya’s final words to Razer after saying she’ll be somehow be with him after her sacrifice: “I do not understand, either. It is just… a feeling.”

Razer’s off to find his lost love the immortality of toys and one-shot comics! Hurray!

Though I found the Aya/Razer romance trite, at least there was some cool imagery out of it. 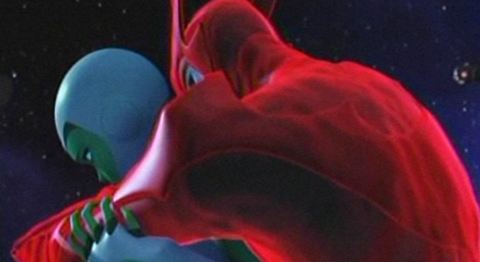 Romance! Romance! (End of) Romance! Artemis will solo as Tigress to distance herself from the loss of Kid Flash, Aya may or may not be around in spirit, Tim Drake and Cassandra are an official couple, and Superboy and M’Gann continue their will-they-or-won’t-they tease into eternity.

Aardman (or at least a reasonable facsimile) meets Batman!

If the so-called heroes in the Justice League and Young Justice won’t give Lex Luthor then I will. Yay, Lex!

This episode all the way up to the final Watchtower scenes provides decent closure, but…

…if anyone stuck around for the whole episode, it’s maddening to know we’ll probably never find out how the YJ teams will engage the Vandal Savage/Darkseid alliance.

Kilowog had to be goaded by Guy Gardner just to finish a few mook Manhunters? After we’ve just seen the odd-looking members (No, I don’t know their names. Sorry, GL fanboys.) of the Corps go slicin’ and dicin’ themselves?

So Aya has been laying the smackdown on the Hal, ‘Wog, and Razer for weeks and shows no remorse. All of a sudden, she directly attacks Razer then she gets emo???

Did you know there is a DC Nation Magazine? And that there’s a second issue? Why so scared of print, Cartoon Network/DC?  They can’t even spare a 10 second plug. 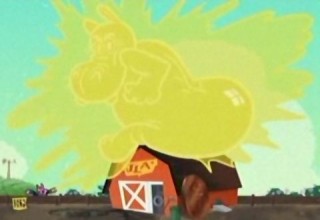 The Justice League’s lawyer, Icon, couldn’t get the League members off the hook with fundamental intergalactic lawyering. The coolest, most powerful kids in the DC Universe, Superboy and Miss Martian, can. So, so silly.

Sinestropotamous having the willpower to summon a giant hippo rubbing his butt on the Farm League’s barn is a poor man’s John Kricfalusi gag.

Toonzone has stills and clips from this week’s Young Justice, Green Lantern, and DC Nation short.