The PBS documentary, Superheroes: A Never Ending Battle, is a collection of American comic book’s greatest hits. For 75 years, superheroes are intertwined with the once-cheap medium. Battle tries to go through every era, from the metallic Ages to today, covering as many highlights as possible within three hours. The three chapters, directed by Michael Kantor and written by Kantor and Laurence Maslon, are “Truth, Justice, and the American Way,” “Great Power, Great Responsibility,” and “A Hero Could Be Anyone.”

A Never Ending Battle bookends with the ultimate superhero, Superman. You may know the origins of Supes: two struggling cartoonists trying to sell their powerful hero until the company that would later become DC Comics brought Superman to Action Comics in 1938. At the end, after all the movie mentions and mingling with pop culture, Superman not only endures, but still stands.

Unlike the Shadow or Man of Bronze, Doc Savage, merchandising opportunities have always been very good the Last Son of Krypton.

Stan Lee on the Science of Superheroes:

Listen to my interview with Image Comics’ Tood McFarlane. 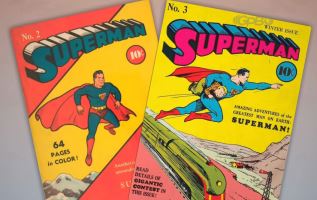 Battle places superheroes in the contexts of the times: the Great Depression, World War II, the Swingin’ Sixties, post-Watergate, post-9/11, etc. Alongside the expected heroes to be mentioned, there are bits of time describing the Sandman, Captain Marvel… er, Shazam, Nick Fury. I like the clip from X-Men 2 with Mystique and Nightcrawler that illustrates the struggle for mutant acceptance. The contributors to the heroes’ popularity goes beyond crafty cartoonists and comics writers.

For example, Battle reminds us that Christopher Reeve and the 1978 Superman movie helped shaped our perception of the Man of Steel while creators Siegel and Shuster are in no way diminished. Through the hard work of Neal Adams and others, Siegel and Shuster did get their much-deserved pensions and credit.

YouTube search: the many videos about Superheroes: A Never Ending Battle

All three episodes amount to an overall celebration of superheroes despite some talk about the Grim ‘n Gritty Dark Knight Returns by Frank Miller and Watchmen by Alan Moore and Dave Gibbons and a brief chatter about the 1990s speculator boom. There are commentators representing women, Blacks, and gays. Battle goes all out to impress the viewer on the impact of superheroes in America. Would the upscale PBS watcher/donator welcome these fine gentlemen in their homes?

Is it now possible the get nostalgic for the 1990s & 2000s? Battle goes into the beginning of Image Comics, the death of Superman, Amazing Spider-Man (vol. 2) #36, Marvel’s Civil War, and the rise of digital comics. As Battle’s a celebration of superheroes and not a thorough examination in the comic book industry, there’s no time to debate about Image founder’s lateness, the erosion of confidence in comics after Superman returned, and how a response to tragedy could be so tacky.

If you know someone who is boggled why superheroes are so popular and has about three hours of free time then Battle is a nice refresher about 75 years of American myths. While the documentary sometimes diverges towards blockbuster movies, hit TV shows, and cool video games of the superheroes, it never forgets that the phenomenon started in the funny pages. There is also a companion book that was released a few weeks before the TV premiere.