Hello, all. It’s been fine here near the Deep South Swamplands. Complaints about the notorious humidity haven’t peaked and I’ve these quick thought to share.

It wasn’t the funniest or most satisying episode, but I enjoyed the nostalgia trip. Yes, the folks at Community threw lots and lots of classic video game tropes to simulate what those old games may have been like. Here some of my highlights:

I’ll watch the remaining two episodes later. It’s a shame Community’s march towards six seasons and a movie will continue on Friday’s next season. I also predict the ratings for last night’s 9 PM showing won’t be near the 2-point-something key demo average of The (Sluggish) Office. Tsk, tsk.

Whither Jim Shooter? Big Jim’s taking a hiatus from his blog to (hopefully) create an awesome seismic shift in the comics industry. However, my current favorite reading about the comics legends of old is this A.V. Club interview with Stephen R. Bissette about his history in the comics biz. He penciled art from Alan Moore’s Swamp Thing scripts over 25 years ago. Below is an (1990s?) interview with Messrs Bissette & Moore.  Don’t tell Mr. Bissette I saw The Avengers, okay? 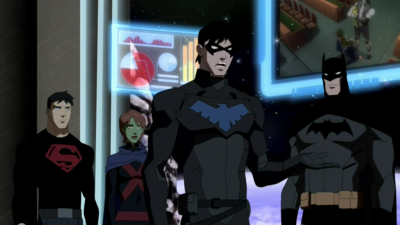 After checking the first three episodes of the 2nd season via Amazon, I’m impressed at the juggling act having all those super guys and gals interact. Why does Aqualad have to turn heel as Li’l Black Manta? Seeing that costume gives me bad flashbacks to Super-Friends.

I care about DC’s roster more than I do the heroes of that Avengers show on Disney XD. Gotta love seeing the Supes/Connor fastball special! I actually tolerate Beast Boy; those characters seem designed to piss viewers off. Notice how the show’s just as much about the Justice League as it is about the young “Team?” The tone of the shows is just right: not campy but not so dark that I want to cheer for the antiheroes & villains. Here’s a preview for the next episode, “Salvage.”

What are your thoughts on Community, Young Justice, or anything else? Share what you want to say below.