I’m not familiar with the Last Airbender universe. From my memory, I know of a bald kid doing fancy martial arts moves and that failure of an M. Night Shyamalan movie. I’m interested in the Legend of Korra because I saw lots of positive reviews by others online. With the help of Nickolodeon’s website, I saw the first six episodes. 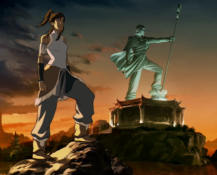 Does Legend freeze out a newcomer like me with lots of continuity? The answer is, “Only slightly.” Legend is an adventure about Korra, a girl who can manipulate four(?) natural elements (bending) which makes her the Avatar and successor to Aang (the bald kid). She possesses a distinct Western attitude while she is to go train with Tenzin, who favors Far Eastern ways of learning. Korra goes about in Republic City and becomes a star at the sport of Pro-Bending instead of settling of boring meditations and annoying training drills. While Korra is reaching her destiny, the anti-bender Equalists, led by Amon, plot a civil war within Republic City using technology that takes away a bender’s power.

Visually, Legend is anime. The look consists of simple, clean linework and somewhat barren painted backdrops, but for Legend, it works. The subplots, which involve the expected heroics and romance, are basic but acceptable. I barely recognized J.K. Simmons doing a cool job playing against type voicing Tenzin. Legend of Korra is a fine children’s that doesn’t go over-the-top in violence or even anime visual tropes. Recommended.

Watch the latest episode, “And the Winner Is…” & scroll down to the comments boxes with your thoughts on this show: