If you’re planning to watch King of the Nerds because you think seeing your fellow geeks on TV is groundbreaking or life-affirming, then you haven’t watched too many reality competition shows. Our hosts are icons whose heyday is long gone, two of the stars of the Revenge of the Nerds movies, Robert Carradine and Curtis Armstrong. Eleven contestants vie for the big $100,000 grand prize. But first, they’re going to be broken up to two even teams. One of the contestants even compares it to getting picked for dodgeball. Characters sure are welcome on this TBS show.

Both captains, Ivan and Genevieve, are doused in colored gunk, Ivan is orange and Genevieve is blue. Genevieve wins rock-paper-scissors to get first pick by gunking another nerd. Why the Nickelodeon-style hijinks? I DON’T KNOW!

Genevieve (captain), a German-speaking fantasy writer who adores Batman, gives the standard line about how she’s nice and sweet on the surface until people get to know her. Her first choice is…

Celeste, the pro gamer who wanted to join Ivan, but Ivan wanted to seek someone else. She picks…

Hendrik, the dude who can speak in a language no one else understands. He chooses…

Jon, the metalhead who enjoyed getting dunked in blue. He selects…

Virgil, the standard-issue smug 1337 h4x0r who spent a lot of his confessionals complaining about not getting picked. 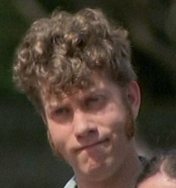 Ivan (captain) is a RPG developer who enjoys taking breaks from reality. He doesn’t seem to be looking forward to the responsibilities of captaining at first. He picks…

Moogega, the NASA engineer. She picks…

Danielle, the genial pink-haired girl. She almost seemed to have to jumped out a (Westerner=made) manga page.

Alana, she gets to play! Yay!

Poor Alana, the lady left out. She gets to suffer the first big twist of KoN: she gets to pick the winning team of the challenge. Now she gets to decide who she feels is the stronger team; the other nerds get anxious. Alana picks Team Orange because she feels they’re better-rounded. Danielle credits her own consolation hug. Alana’s moved onto the Blue team.

Two members of Team Blue are chosen for elimination, or the “Nerd-Off” in the language of the show. Hendrik seriously considers throwing himself to the Nerd-Off. Not surprisingly, Hendrik is, by vote of the Blues, unanimously going to the Nerd-Off. He’s going against Jon, the pick of Team Orange. Henrik will battle Jon in chess. Each will have one adviser. Hendrik wants his adviser to be at the level of novice.

Henrik tells us about his photographic memory that will aid him. Jon plays chess on a computer. Chessboxing would’ve been a more interesting contest; neither nerd looks like they’re the Big Blue at chess.

Jon and Henrik will play chess over a life-size chess board and pieces. I hope you all know the objective of chess, do you? I remember me and another girl didn’t understand chess when I was in elementary school so we just played checkers with the chess pieces. Grandmaster, I ain’t. 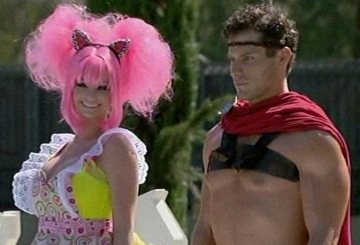 Anyway, a pink-and-white candy lady moves the chess pieces and bouncily reminds everyone of her assets while stern Spartan guy slashes the conquered pieces. Jon & Virgil defeats Hendrik & Alana, the former chess club member, with what I’m sure is an impressive series of maneuvers and counter-maneuvers. Chessboxing would’ve still been cool. Or not.

Hendrik at least cracks a smile on his way out. Seeing a defeated nerd enter a garden isn’t the meaningful walk of shame like Hell’s Kitchen’s burning-portraits-and-dimmed-hallway exit, though. Hendrik’s final thoughts are on infinite universes and the possibility that his alternate self may have won some other King of Nerds contest. Hendrik’s a cool dude, but thankfully I don’t have to see his awkwardness struggling against the schemers for weeks.

Hendrik is eliminated from King of the Nerds.

Oh, wait, all the genial geekery is thrown out the winder as shoots a laser zapping Hendrik out of the game. Tsk, tsk.

King of the Nerds: not as bad as I thought as it was going to be. Now, it seems that Lauren has disappeared without a trace as the video’s removed.

Visit King of the Nerds official website at TBS.