Last week on King of the Nerds: the Nerds dumped gunge/paint/whatsit over each other to form teams. Alana has her first crisis of confidence. Awkward Hendrik loses at chess.

Who is eliminated this week? 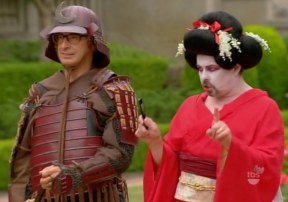 The Nerds return to the Nerdvana mansion for a moment of respite. Jon is congratulated for his victory over Hendrik in chess. Celeste, in her confessional, gets suspicious of Alana because of picking Orange and helping Hendrik. Celeste says she’s “waiting for strike three.” Virgil is hopeful that Blue will become more cohesive.

The next day, the Nerds are called out to meet our costumed hosts, Samurai Robert Carradine and Geisha Curtis Armstrong. Genevieve complements Curtis’ beard for enhancing the costume. If you couldn’t guess, the Orange/Blue Nerd War is a cosplay competition. Virgil tells us his experience is seeing his cross-dressing female friends making out with other girls dressed as boys. Nothing dull for him.

The teams are assigned to create an imaginary mythology with each character being a part of their created world. Orange are fantasy villains; Blue are sci-fi heroes. Both teams each have a war room of supplies to build their costumes. Both teams must also have their own names. Curtis sends them a Na’vi farewell and they’re out to their basements to build their costumes.

Joshua and Moogega show confidence in team leader Ivan. Blue leader Genevieve decides on a steampunk theme; she’s to be a former orphan. Virgil decides to sabotage Orange by taking as many tools from the Radioshack room as he can. Brandon and Virgil have a brief argument over what Brandon calls dick moves. Genevieve pulls Virgil away ending the spat. Alana chastises Virgil for not focusing on his team.

Brandon nitpicks that Yaya lacks Chun-Li’s thighs. Um, I don’t think even most Chun-Li admirers are going to notice…

Genevieve foreshadows that the Blextrophy concept will go over the judges’ heads. 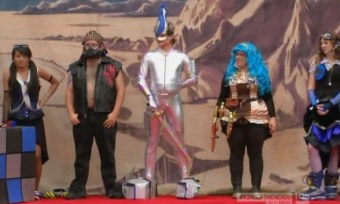 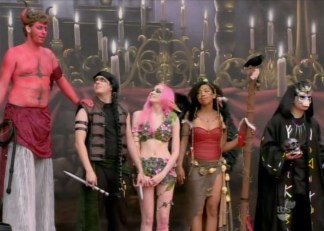 Judges pick team Orange. As the Servants of the Forsaken Orb, they had a more coherent presentation. Blextrophy was too individual and their meta mission of fighting cosplayers is bizarre. The judges had similar agreements.

Orange’s reward is training with a sword mistress at the Cirque School. There, they put on knight armor and practice their swordplay. They have a Little Caesars feast of pizza and wings. They agree to send Genevieve to the Nerd-Off.

Meanwhile, the Blues consider putting Virgil to the Nerd-off. Later, Virgil, trying to save face, pleas with his teammates to have himself or Alana to be their Nerd-Off choice. Alana: “F**k Virgil. I know where he sleeps and there are knives in the kitchen.” Genevieve lets Virgil know that he shouldn’t troll with the other team.

Genevieve and Ivan have a conversation. Even Genevieve knows that she may be sent to the Nerd-Off. In his confessional, Ivan gives another reason for ridding of Genevieve: she’s already done with cosplay.

Orange unanimously picks Jon. The majority of Blues pick Alana. Virgil shows humility in being spared. It’s Jon vs. Alana in a trivia contest about imaginary realms with three hours of prep time.

Jon has Virgil as his helper. Alana enlists Danielle as her aide.

Rules: a correct answer earns one roll of a giant multi-sided die. 100 points for every enchanted creature knocked over. However, wizards are 500 points and black knights are 1000 points. Lower scorer is gone. Both answer questions by themselves.

Alana emerges victorious, 1900-1800. Jon loses and is eliminated from King of the Nerds.

Turning point: Jon missed the third question about the amount of books in the Naria series. Alana then gets an incredibly lucky roll knocking down the Black Knight among others. Both get the final question right, but Jon couldn’t get knock down that one gnome.

Brandon: “Victory by another gnome would smell just as sweet.”

Jon rocks out of Nerdvana. Actually, the KotN powers-that-be are taking a page out of Wile E. Coyote/Road Runner cartoons and have a giant rock fall on Jon.

Alana escaped defeat this time and Orange’s strategy of putting a good member of Blue worked, but with the subtle change of the rocker instead of Genevieve. I don’t recall how good Jon was, but at least he seemed cooperative. On these reality competitions, sometimes being too cooperative is also being too noticeable.

It helps that Orange is led by an RPG developer. The fantasy villian theme may have been his opportunity to act on a dream. Cue the cries of “rigged!” after Alana’s lucky roll.

Who’s your pick to win King of the Nerds? Did you agree with Jon’s send-off? What were the best costumes?

If you like cosplay, please read our coverage. Finally, TBS presents the “Untold Story of Cosplay:”

NEXT EPISODE: Going through challenging gates means entering the gates of victory.

3 thoughts on “King of the Nerds Review: Imaginary Realms (S01E02)”