Last week on King of the Nerds: Yaya Han enters our show as Chun-Li. Yaya couldn’t impress Brandon with her lack of thick thighs. Yaya & the other judges picked the Orange team as the better cosplayers. And Jon rocks out of the competition.

It’s a new day in Nerdvana. Genevieve sings, Virgil sulks, and Danielle’s searing in her confessional over Genevieve’s vocals. After her shudder-inspiring Little Orphan Annie-inspired performance, does anyone have a desire to sledgehammer their own ears every time Genevieve sings?

Seriously, Genevieve’s sweet and well-meaning, but the title of the episode inspired me to write that last question.

Orange is officially “The Servants of the Forsaken Orb” and Blue is now “Blextrophy,” but the team names will be used interchangably for reference. Our hosts, Robert Carradine and Curtis Armstrong present the latest Nerd War prop:

Celeste, competitive gamer, is looking forward to this.

Both teams alternate turns moving a copter through gates while the other team member tries to shoot it. Large gates are 10 points, small gates are 100 points, chomping gates and fire gates are 500 points. Shooting the copter is a 500 point penalty for the attacking team. Orange has to sit one player for even teams. Ivan recuses himself admitting in his confessional that he likes delegating duties.

Pre-game, Celeste helps the struggling Virgil with the copter controls. Will the Virgil-related antics continue?

Also, Ivan supports his team as the Chicken Panda. Celeste notes that Orange is indeed getting cocky.

Round 1: Danielle (offense) vs. Alana (defense/shooter)

Danielle’s run goes smoothly at first as she gains 1200 points. Unfortunately, she crashes her copter and never recovers her momentum. The copter even breaks shortly before time runs out.

In her analysis, Alana notes Danielle’s anger and also states that Danielle’s PC gaming skills couldn’t help her with the “more consoley” iPad controller. Yeah, Alana’s referencing the tensions between PC and console gamers. To be more precise, it’s more like “gamepad gamers” and “keyboard-and-mouse gamers,” where I can use both sets of inputs for my PC gaming. I can’t cool things between KBM warriors and gamepad gurus, so the recap continues.

Celeste gets 1700 points, the Star Wars-loving Joshua shoots down her copter twice. Result: Blextrophy has 700 points.

Moogega strives to get the big-point gates, but is stuck getting her copter through the chomper until about a minute left. Her highlights are that chomper gate and a fire gate for 1100 points.

Genevieve, on the other hand? Well, I like her singing better than her shooting. She could hit a note at least. 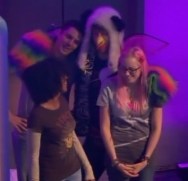 Into the final round, Orange is ahead, 2300-700. Ivan is really getting into his Chicken Panda persona. Yikes.

Brandon, the hardy, gun-loving Texan he is, has to adjust to these silly Nerf guns.

Virgil struggles with the copter controls. Joshua, in his confessional: “Virgil couldn’t get it up. Dude, it happens! It happens!”

The commercial break tries to introduce more tension for the viewers. Like last week, there’s a miracle come-from-behind rally. Virgil composes himself as Celeste advised then racks up 1820 points ensuring Blextrophy’s first victory.

Joshua becomes an opportunist by starting a ploy to save his butt from elimination. After telling Danielle that he’ll vote her to the Nerd-Off, Danielle’s saddened. Joshua tells Danielle that he has a change of heart and will vote for himself (he doesn’t). Meanwhile, Blue considers Joshua and Danielle.

Blextrophy unaminously votes Brandon. Virgil admits that they’re taking out the “soul” of the team.

Both Brandon and Danielle have two hours to prepare. Orange have SAD FACES, including Joshua. “Did I do…the wrong thing?” asks Joshua.

Rules: both nerds must maneuver their own RC golf-carts and move their own ball into the goal. First to score two goals wins.

Unfortunately, Brandon couldn’t get a handle on RC vehicles in practice with a toy truck and in the Nerd-Off. But, hey, there’s Wendy (a.k.a. “that chess piece-moving chick”) to perk most of them up. Celeste and Joshua are happy to see her for entirely different reasons. Joshua calls her “Mindy.” Mind games against the viewers? No…

UPDATE: It’s Mindy Robinson, confirmed by Danielle herself in the comments below.

Anyway, Danielle sweeps 2-0, defeating Brandon. Brandon is zapped out of King of the Nerds.

The Servants, not pleased with Danielle’s victory, will now be a mess. Blextrophy’s cheerleading must be seen to be believed.

And check out what happened this week: Danielle and Brandon are paired in a Nerd-off. Danielle has just been screwed over by Josh, while Brandon is yet another nice guy who doesn’t create any drama. Which one do you think the producers would want to keep on the show? Funny how Brandon’s cart, which was ASSIGNED to him, didn’t seem to work as well as Danielle’s.

You’d have to include the practice RC trucks, too. Even then. Brandon admits his poor aptitude for those devices. If that part was cut out, then the cries for rigging would probably be much louder. As Brandon exits, even Curtis (I think) was surprised that Brandon was out of the competition so soon.

I assume good faith that the producers are keeping the competition on the up-and-up. Brandon provided a lot of quotes and enthusiasm. Hmm, I wonder what he’s up to now…

Brandon, now back to being a neuroscientist, had a distinct personality and seems to be a cool guy. Even TBS features him in promotional materials. However, if he could get a handle on those vehicles, he may have had a chance to beat Danielle in the Nerd-Off.

Joshua is a sneaky tactician and Celeste should run Blextrophy as she assertive enough to get Blue to focus. Who’s your favorite to win? Are you finding certain events to be too convenient for TV ratings? Why are we still watching/ Alright, please email or comment to me.

9 thoughts on “King of the Nerds Review: Games Without Frontiers (S01E03)”