When I saw the TV listings, I came across a weird title. Japan-what-zi? For a moment, I thought there’s a show called Japanazi, which would be very bizarre.

Oh, yes, Japanizi, a new show for kids? Hmm, seems interesting. Japanizi: Going, Going, Gong is a spoof of Japan’s goofy game shows brought to us by Canada. Airing in late November on Disney XD, this show goes all out to give viewers that distinct game show experience: big graphics, expressive personnel, wacky stunts, and so on.

I’m torn on whether the show is genuinely offensive.

Japanizi pokes fun at the silliness of Japanese game shows. They’ve been a cultural curiosity for a while now. Remember Hole in the Wall, which was adapted from “Human Tetris” segments-turned-viral-videos? Most Extreme Elimination Challenge? I Survived a Japanese Game Show*? With the knowledge that there’s some cooperation with Japanese people involved**, I recognize the makers of Japanizi didn’t intendo to offend people of Asian descent.

* – Japanizi is, in fact, adapted from I Survived a Japanese Game Show.

** – Toronto Sun review: “Although the show is made with the cooperation of the office of the Consulate-General of Japan in Toronto and has Japanese cultural consultant on staff…”

Also, the contestants, several of whom aren’t Asian, are given neither favorable nor unwanted special treatment.

My first concern: the first stunt where the contestants, dressed as chickens, pick up eggs from one side, cross a wobbly bridge avoiding the shallow pool, then drop them off into a nest. I’m worried about the contestants getting injuries in something that’s seemingly harmless.

The other stunt rounds don’t seem out of place with their inspirations. One round has contestants alternate between picking up rings from a cream pie and lifting a balloon to prevent a moving toy train bursting and the other is a duel where Judge decides the best sticky jump poses.

The gameplay is very “meh.” Elements of which were done better on other shows like Double Dare and Wipeout. 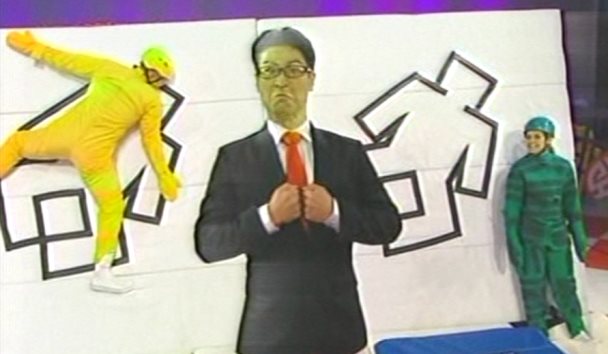 I can also see how Japanizi can cause offense. The rubes who can’t tell East Asian cultures apart might laugh at the hosts, not with them. From reading the credits, the Japanizi powers-that-be may not be Japanese or of such descent themselves. Japanizi may not be the worst half-hour ever, but I’m not eager to watch more than I can stand.

I’ve considered a comment from Josh, a Japanese-American who responded to a Nikkei Voice interview with (Judge Masa). He felt Japanizi was so racist he blocked the Disney Channel in his home.

Being African-American, I can think of American game show parodies filled with tacky music and sets and a hammy emcee. But then, there’s only so many zaniness I can take. One entire episode of Japanizi is more than enough for me.