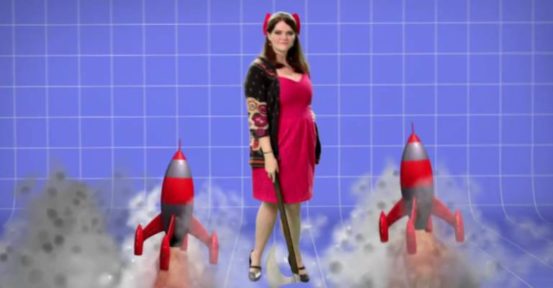 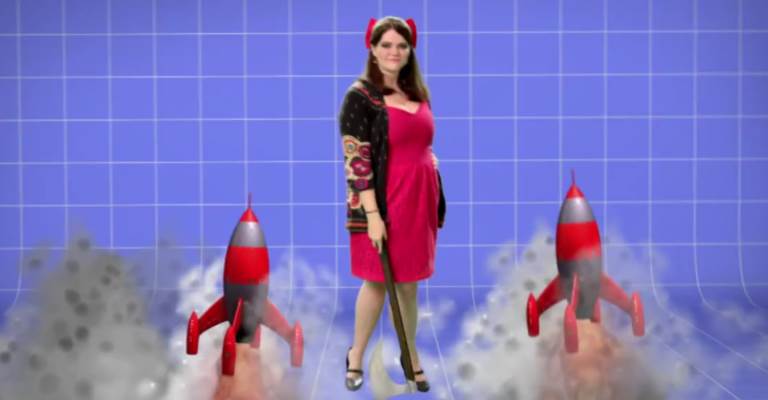 Mary Kate Smith, a contestant of King of the Nerds season two, is an aerospace engineering student at Mississippi State University. Unfortunately, she exited from the show in the third episode, “To LARP or Not to LARP,” where Zack defeated her in the Nerd-Off challenge Battlehammer.

Read on to see her comments on tabletop games, meeting some of the season one Nerds, and RuPaul.

Red-Headed Mule: What was the moment you were hooked to King of the Nerds season one? Have you met any of the season one contestants and how were they?

Mary Kate: As soon as the S1 contestants’ personalities started to come through in episode 2, I was hooked. I loved to watch this group of incredibly different nerds battle it out. King of the Nerds has so much heart and I loved every minute of Season 1.

I have had the distinct pleasure of meeting quite a few Season one contestants. I am happy to report they are even more awesome in person. I love nerding out with them, and I am very happy and honored to be apart of this Nerd family.

RHM: Did you have a rocketry-related project or activity as a kid or as an college undergrad?

MK: The most notable rocketry related project is my involvement in the award winning MSU Space Cowboys. I have been on this rocket design team for 4 years. The team designs, fabricates, tests and launches a high powered rocket, as well as, write and present design reviews for a NASA competition called University Student Launch Initiative.

I have worked on the structures/propulsion subteam and the recovery subteam. I served as one of the team leads, Project manager, for two years. My involvement on the team has taught me a lot about engineering design, real in lab experience and what it means to be a leader under stressful conditions.

RHM: What do you think of Zack winning three straight Nerd-Offs? Did Zack get on your nerves during your stay in Nerdvana?

MK: In Nerdvana, you have 11 vastly different personalities that come through the front doors. We spend almost every waking moment with one another. Everyone got on my nerves at some point during my time on the show. As far as Zack winning three straight nerd-offs, I will give it to him, he is one lucky dog.

RHM: You’ve stated on your TBS profile that your favorite game show is RuPaul’s Drag Race? I don’t think of it as a game show, but explain to me the appeal of the show.

MK: Rupaul’s Drag Race is certainly a game show! The appeal of Rupaul is that it combines fashion, talent, comedy and heart. The biggest out of those is “heart”. The queens that participate in that competition are fierce and really show how passionate they are about their drag.

It’s funny how much I have personally gained from RuPaul’s Drag Race. Xander and I were talking one day about what we personally took away from our experience from Nerdvana. We talked about how important it was through all of the challenges that we remained true to ourselves. We realized that we were basically preaching what Mamma Ru says closing every episode. “If you can’t love yourself, how the hell you gonna love somebody else!” That heart. That’s the appeal.

RHM: How can you like Colin Baker’s Sixth Doctor in spite of his attitdue and that infamous jacket? Have you listened to the critically-acclaimed audio dramas? I think Baker’s era was hobbled by bad scripts and poor overall direction. 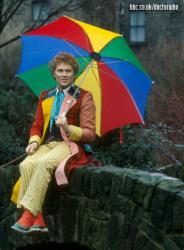 MK: I am eccentric and love attitude, which is what Baker gives me. You are completely ignoring some of his best moments. Baker doesn’t get a lot of love, and while I am not afraid to admit that his seasons were weak in comparison to some of the other writing, the novels written about the sixth doctor are pretty good. Plus, if you saw my Nerdy Bio video, I have “bag-lady” style. Pretty sure Baker’s doctor and I shop at the same places. The sixth doctor should be given a second chance.

And I will fully admit to falling in love with John Hunt recently….

RHM: Have you cosplayed and if so, when was the last convention or public event you’ve done so?

MK: One of my many hobbies includes costuming. I usually costume characters from comics I read, mostly Marvel at the moment. I attend DragonCon in Atlanta, GA every year and do huge photoshoots with the amazing Superhero Costuming Forum. Costuming is incredibly challenging and rewarding. When I walk out on the floor with my Princess Python and people ask me where my Circus of Crime is, it makes my con.

RHM: As a board gamer, how would you improve Monopoly?

MK: I am tabletop/board gaming gal! So first off, I would toss Monopoly all together. Monopoly is for people who don’t want to have fun and a real challenge. If you want a game that takes up as much time as Monopoly, there is a HUGE selection for you.

One of my recent favorite board games to suck my time from me is Twilight Imperium. I learned to play last year. The longest game of Imperium I have played was 9 hours! But games like Survive!, Arkham Horror, Alien Frontier… All are MUCH better than Monopoly. I know you asked me to improve it, but why waste time when we could play something far better.

RHM: What are you looking forward to in the Disney-owned Star Wars?

MK: Honestly, I don’t really keep up with that information. I’m an original trilogy and expanded universe kinda girl. I do hope they bring more puppeteering back to any future films. CGI loses so much heart and realness. So I’ll just sit over here and anxiously await any news for a sequel to “The Dark Crystal” instead.

RHM: What can we expect in the future for you?

MK: I graduate from Mississippi State University this May 2014. Quite an exciting and scary time for me. I am currently looking for a job, specifically astro related, or possibly getting a Masters. I know that I hold to the fact that the greatest endeavor of mankind is to reach out as far as we possibly can into the universe. I will be apart of that reach. Never turning my gaze away from the stars.

Read more about King of the Nerds!