YKSB Alert – “You Know Something, Brother!” Alert. When pro wrestling legend Hulk Hogan makes a move, RedHeadedMule.com will seek to document it.

Movie stars Hulk Hogan and Carrot Top will be featured in Ms. Winfrey’s latest Oprah-fest, Oprah: Where Are They Now? The Hulkster GETS REAL with America’s hostess with the mostest talking about some of his aches and pains.
Watch Hulk Hogan share his family-related adversity:

For decades, professional wrestling legend Hulk Hogan incited “Hulkamania” around the world. Then, everything changed when Hulk’s 24-year marriage began to crumble and his son, Nick, went to jail following a tragic car accident. Hulk says he hit rock bottom and even contemplated suicide. Now, he opens up about the night he realized he couldn’t take the negativity anymore.

According to the press release, Hogan will discuss how he considered suicide. He once had stared Suicide right in the face, then told him to change his name to something less scary. Such is the power of the Hulkster, dudes! 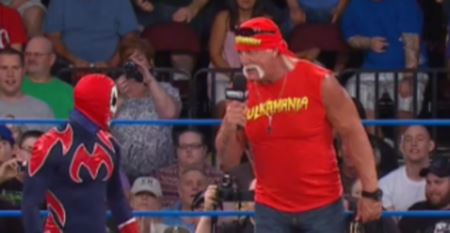 The Hulkster will also talk about his cozy domestic life co-starring a new wife and his chihuahuas. If Hulk chats about ducking the TNA Dixie Train, then maybe this Oprah show would be worth watching. Maybe.

Will Ed Leslie or one of the Nasty Boys make a cameo appearance? Will Oprah squee after sharing her experiences as a raving fangirl watching WrestleMania 2 in Chicago? Should I add something about Carrot Top, Scott Thorson, and Cris Judd? Who knows? Who cares.