It’s the second week of Hollywood Game Night, where we feel the glow of pure Hollywood star power! Or maybe it’s the monitor I’ve staring at for too long. 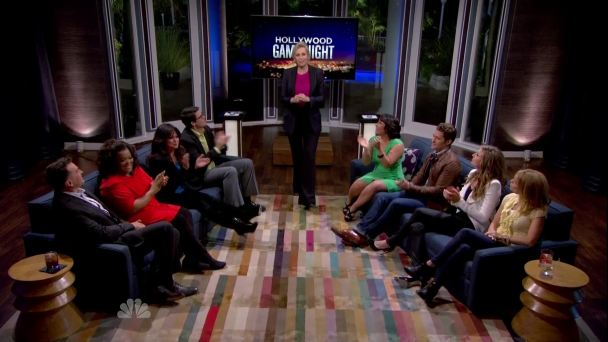 Cheryl Hines
Sarah Chalke – while she did the splits and the Robot, she’ll find a way to kill the buzz later…
Matthew Morrison

Team Captain, Fernanda from Inglewood but originally from Chile. 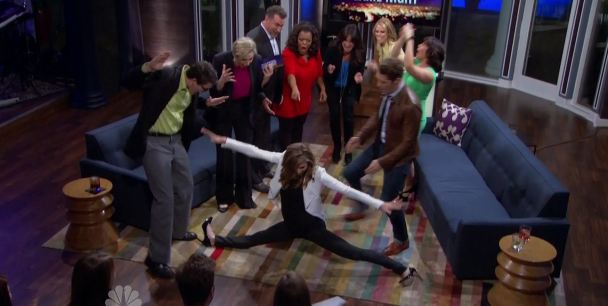 Game 1: Celebrity Fusion – a mashed up image of two celebrities is shown. Players must identify the first name of one and the last name of another.

I can’t believe John Wayne would be relevant fodder for a TV show. John Wayne Newton is a bizarre concoction. Even that even George Harrison Ford looks normal compared to the nightmare that is Daniel Craig Robinson: 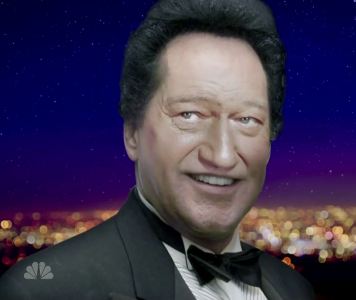 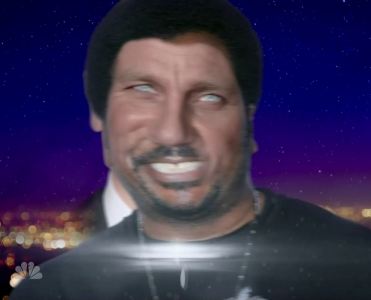 I’m relieved that the melding of famous faces is over and Andrew’s team leads 4-2.

Reminder That The Viewers Are Mere Mortals: Rob Riggle gets a standing ovation from both teams when Jane points out that he’s not only a celebrity, but a Marine!

Game 2: Smash the Buzzer – Given a category, Jane lists items that may or may not fit in that category. Anyone on either team knowing which item fits can hit the buzzer and give the answer. If correct, the player can eliminate an opposing player. Otherwise, that player is gone. Losers console at the bar.

As a quiz, the answers are easy with the first few choices standing out as laughably not fitting the category. The only entertainment value is seeing celebrities potentially jump from the couch, tumble, and make a funny. It’s a good thing the only victim is Valeries’s left pant leg.

Cheryl Hines blew the final category, so we get to see Jane and Rob do a victory dance to the tune of the Marines’ Hymn.

Game 3: TV ID – Given the name of a TV show, players bid on how many words they can describe a show to the rest of their team. The player with the lowest bid then describes the show. Correct answer awards two points, incorrect gives the points to the opponents.

It’s fun to see the creativity. Except that Sarah befuddles her team with the very generic description of “cooking competition.” I think Yvette gave at least 3 correct answers.

Game 4: Home Sweets Home – guess the candy shown. They is a variety of tasty treats, according to Jane. This game be almost a blowout, according to me. I miss Jolly Ranchers.

Game 5: How Do You Doo? – Teams must identify songs with only players singing “Do.” Player who guess correctly gets up to do the singing. Each team does this for 90 seconds for 5 points a song.

Matthew Morrison may be the ace in the hole, but Sarah Chalke rises to Number One on the Fail charts with “Pass, Pass, Pass.” Too bad, Fernanda. What a waste of Matthew Morrison.

Yvette is playing for $10,000 to Amazing Grace Conservatory. Andrew plays for 25K. Where Alyson Hannigan struggled last week, Yvette and Andrew breezed through the bonus round. All hail Yvette! 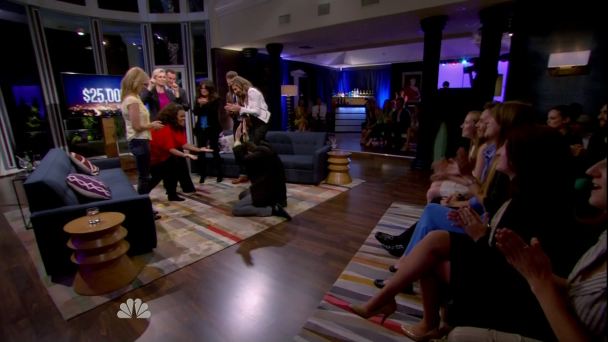