LAST WEEK on Hollywood Game Night: NBC tries one last stab to make The Office something we should care about. TWO WEEKS AGO: Aubrey Plaza was neither awkward nor barefoot, Dominic Monaghan didn’t condemn the crowd with his hit song, “You All Everybody,” and Molly Shannon and Wilmer Valderrama were just happy to be there.

Jane Lynch welcomes us to the “House That Four Years in Track Suit Built.” Ha.

It’s been a fun eight weeks. Hollywood Game Night is a decent little show that NBC can use to promote its stars for the next few years. Jane Lynch is an inspired choice to emcee as she engages with everybody and maintains a fun atmosphere.

Hollywood Game Night could use a few more games for variety. The bonus round is completely dependent on the celebrity’s competence. Guessing 10 answers right in 60 seconds should be easy. Visit the Game Show Forum if you want further nitpicking.

This week’s episode isn’t quite star-studded. It’s odd to see Tom Arnold in 2013, but I’m more disappointed that Once Upon a Time’s Emilie de Ravin was a non-factor in this game. At least there were no Martin Shorts trying to hog the show. If there’s any reason to watch this episode, it’s for the Amber, the contestant in the thick-rimmed glasses who was actively invested at times in her team. Compare her to Chris, who was practically invisible.

On with the show!

Notes from “Portrait of a Killer Party”

Game 1 – Portrait of a Killer Cereal

I’ve eaten cereals from Fruity Pebbles to Wheaties to Lucky Charms, but I never liked a cereal that contains neither grapes nor nuts.

“Those TV Guides you’ve been hoarding since 1992 are about to pay off.” It’s like Jane knows me…

Terry Crews gives a terrible clue, “I want money,” for Who Wants to Be a Millionaire. My, how catchphrases like “final answer” have been forgotten.

The clue-giving in general is poor this round. (Example: is anyone supposed to get The Daily Show from “Happens every day?” Dallas from “Soap cowboys?”)

In honor of the featured subjects, here’s YOUR chance to ogle at pictures of Britney Spears and popular children’s toys.

Amber showed some awesome quarterbacking, barking orders to David to get all of the toys correct. I don’t think all dates are correct, but for your benefit:

After the round, Amber said the she was so excited, she lactated. (Terry did and Jane ovulated)

Here comes the contributions of the students of Dahlia Heights Elementary School in Eagle Rock, California. More precisely, the classes of Ms. Roberts and Ms. Zimora; both teachers are present in Jane’s House.

Jacob from Dahlia Heights Elementary drew one of the strangest portraits of Dwayne “The Rock” Johnson I’ve ever seen. That haircut leads me to think that the source image is from the WWF Attitude Era. 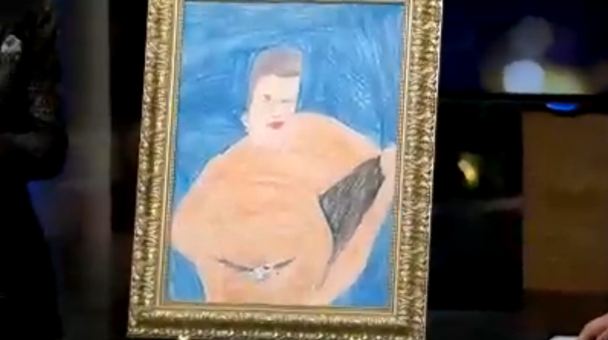 For the record, David’s first guess was Jack Black and Emilie’s guess was Jonah Hill.

Not much to note, but I’ll ask: how does someone charade The Color Purple, anyway?

Amber wins $25,000 and David wins the same for his charity, Ronald McDonald House Charities. That’s it! See you next summer.