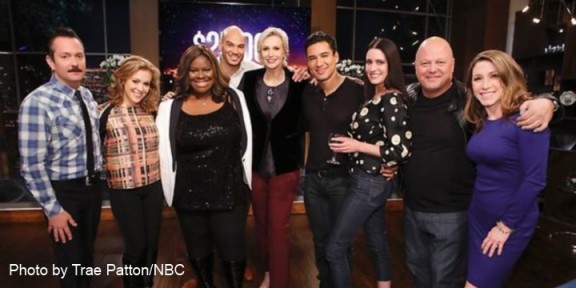 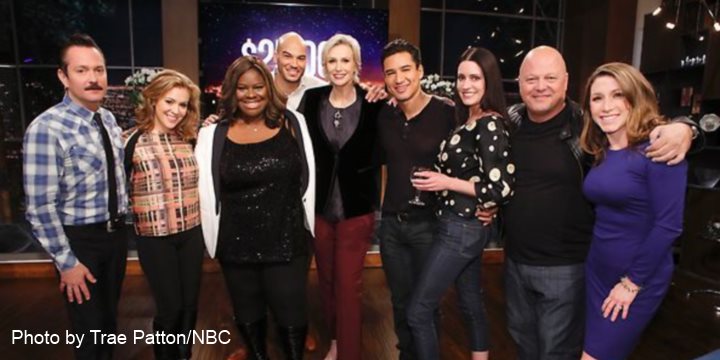 Thanks to NBC scheduling, there’s a load to review. The first episode, Party Boys vs. Game Night Girls is very painful to watch thanks to Martin Short. Maybe at comedy, he’s an insufferable genius, but on this show, Short’s just insufferable.

The new episodes are brought to us from the much roomier Jane Lynch Estates. I preferred the previous set, but this one’s okay. 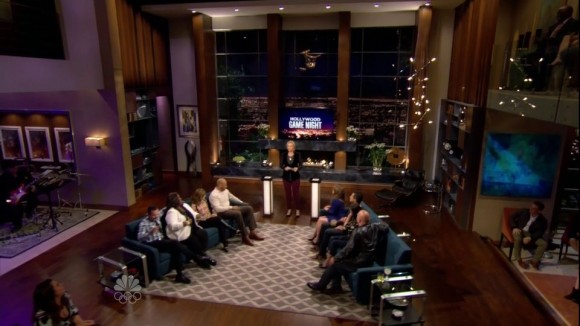 The second episode, “Thing That Go Clue-Boom in the Night,” is much better. Below is an abridged recap of both episodes. Sorry, no round-by-round breakdowns I did on the last season of Hollywood Game Night.

New Games (At Least To Me)!

Off the Top of My Head – Team members stand in line each wearing billboard glasses. Player at end of line gives clues to word that’s placed on top of the billboard glasses to player behind him or her.

Show Me The Music – Songs are performed by the house band. While wearing silencing headphones, the team captain guesses the song the other team members are acting out.

Watch a clip of Show Me The Music:

Celebrity Name Game: Jennifer wins $25,000, while Valerie wins the same amount for Blessing In a Backpack.

The filename of the pics reveals the solutions. Place your mouse cursor on the image and you should see the filename on the bottom status bar.

“Things That Go Clue-Boom in the Night” – Cory v. Caroline

Pieceout – Guess the board game given the game piece shown.

Watch a clip of Clue-Boom on Hollywood Game Night:

In Other Words – Players paraphrase a famous movie line. The strict rules forbidding even articles and prepositions are too much.

The filename of the pics reveals the solutions. Place your mouse cursor on the image and you should see the filename on the bottom status bar.