A review of the game where the Squares setting leaves Hollywood glamour for the NYC club scene.
UPDATE: Second episode video below.

I didn’t know what to expect from the new version of the classic Hollywood Squares format. I do appreciate that this durable televisual Tic-Tac-Toe is here on MTV2. I stay on the edges of hip-hop news so I recognized some of the stars but the ones I didn’t stop from enjoying the show. Mac Miller, in the tradition of Paul Lynde, Joan Rivers, Whoopi Goldberg, & the Internet-less Martin Mull, does center square duties in the premiere episode. Miller and the other celebrities made the show a breezy, fun time.

The structure of the game familiar to game show fans remains. Two contestants, a Mister X and a Miss O, have to agree or disagree with a celebrity’s answer. The questions tossed by host Peter Rosenberg are general knowledge. The quiz stuff is a little challenging for many of the targeted young viewers but won’t put them into double jeopardy. An example:

Winner of each round gets $500. Contestants play until time is called. If time’s up while a round’s in progress then the contestant each receive $100 per square won. Whoever has the most money goes on the bonus round. Oh, wait! I almost forgot that the second round is the G-Spot (Secret Square) where a contestant’s successful pick earns $1000. That money is a prize that doesn’t count in the scoring. Bonus round: pick a row, choose the star telling the truth for $2500.

I enjoyed the loose, party atmosphere. The pace of the show was not slow at all. The feel of the show broke away from a “make it exactly like yesteryear” approach some die-hard fans would want. It’s good for the folks at Hip Hop Squares that they did things their way without ruining the essentials of the game. I liked that the stars are not using the “give a joke answer before a real answer” routine that was in most previous versions of the Squares.

If Ghostface Killah was the catalyst of bringing along the stars that willing to play then I say that he should be a regular. Also, a big YAY for Childish Gambino (Donald Glover) who got SOME action during the episode.

Big thanks to MTV2 for making the show stream-able (at least for the U.S. viewers…). I look forward to watching a whole season of this. Note to producers: just keep Joan Rivers away if you can! 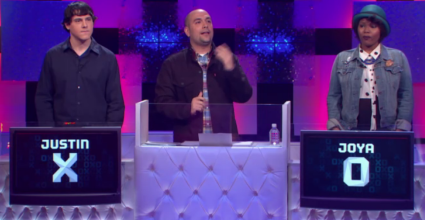 Watch the premiere episode of Hip Hop Squares below:

I liked this show! *DING* What do you think of Hip Hop Squares? Please comment below.