HUZZAH! Six more GLORIOUS episodes of Earth’s Mightiest Heroes, The Avengers!! Volume two is rightfully dubbed “Captain America Reborn!”. In the eigth episode, ‘Some Assembly Required’, you see that the Avengers are lacking as a team. Something just isn’t right with it all. But they still manage to come together. And, with that said, episode nine (Living Legend) lays the groundwork for what will ultimately be a great team dynamic. Captain America returns!! in a somewhat “Ultimate”-style comeback (watch/read The Ultimates), Captain America tries to come to terms with the 21st Century and proves to be a great asset to the team. He also realizes that there are threats that are more familiar to him than most. With that in mind, Cap joins the team. :)

The 10th episode is “Everything is Wonderful.” As soon as I saw the title, I was stoked! I love me some Simon Williams, aka WONDER MAN! With a cameo of his original bad guy suit at the beginning of this episode, if you like Wonder Man, you can’t miss this one. This episode is all about his origin and how he handles his new power. He is played from the start and eventually goes the way of a forgotten piece of fruit…bad. Episode 11 is terrific as well! The Black Panther joins the fray! With the Black Panther becoming more and more popular (and with GREAT reason), Marvel FINALLY brings him to the Avengers! It’s balls to the wall action from start to finish in T’Challa’s Avengers’ debut as he is on the hunt for Man-Ape, who has recently over-thrown Wakanda. But, it doesn’t stop there. We then get to see the team take on the Grim Reaper, Klaw and Hydra as well! So much action packed into 22 minutes!

Then you have episodes 12 and 13…Gamma World. One word can describe this two-part epsiode…WOW. What happens when you infuse Gamma ray particles into your favorite Avengers? 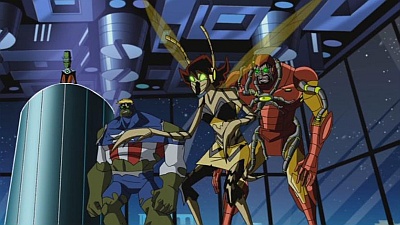 You get AWESOMENESS PERSONIFIED!!! You get to see almost all the Avengers in their hulked out versions and it is amazing! The Leader has a new plot to over throw the world and , as if we had NO IDEA it was coming, it is wuth the use of Gamma Rays. Even after a does of radiation, the team keeps ticking. But wit hall that brute strength on their side it comes down to brains to take down The Leader. By the way, did I mention Hawkeye is in this volume? NO!? Well, HE IS! and he is the good ole’ fashioned Clint barton you grew up with and admired. He doesn’t take crap and he commits 100%. Not only do you have all that to look forward too, but Supervising Editor Joshua Fine and Story Editor Christopher Yost (From Marvel’s Cinematic Universe Tie-Ins Christpher Yost? YEAH!) do a breakdown of some of the characters and hint at the big picture for season two. Take a look at this collection today and get your free (valued up to $12) movie ticket to see ‘The Avengers’ this Friday, May 4th!!

See Hawkeye confront the Hulk in this Marvel-provided clip:
[tube]http://www.youtube.com/watch?v=ZKo3Vmlbqf8[/tube]