Congratulations, BBC, for fifty years of wandering through time and space. The big anniversary episode should be better than Dimensions of Time and maybe The Five Doctors. I’m gathering several points of Doctor Who-related nostalgia, but there will none of that Tom Baker wax dummy nonsense. Nope.

I don’t have the best vantage point for these items, not being born until long after Doctor Who premiered and not being British. That doesn’t deter me from crafting this list of the peaks of valleys of Doctor Who history.

The Doctor Who Theme

One of the finest and purest examples of electronic music. Using Ron Granier’s composition, Delia Derbyshire used no conventional musical instruments to patch up this eerie synthesis.

It feels so right that the original theme is a part of the more recent themes by Murray Gold. 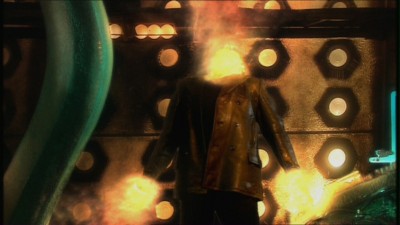 I know I’m pushing it by placing a 2005 event as nostalgic, but it’s one of the important events in Doctor Who history. The fan reaction must have been immense (I wasn’t a fan at the time). Without Eccleston exiting after the first series, we wouldn’t have David Tennant ready to pilot the TARDIS.

Remember, Eccleston’s leaving Doctor Who was announced before the second episode aired. Read the news story from the old GallifreyOne.com site. 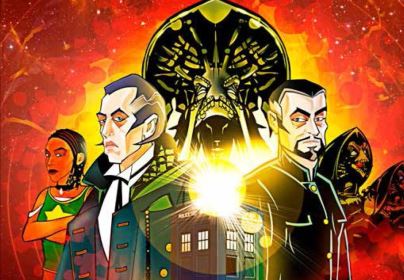 Speaking of the Ninth Doctor, Richard E. Grant was officially the successor to Paul McGann for seemingly five minutes. The BBC webcast, “Scream of the Shalka,” was to be the continuation of the Doctor’s adventures.

“Shalka” stars Grant, with Sophie Okendo as his companion and the head of the Master he keeps as a pet in the TARDIS. Watch for a cameo from a guy named Dave Tenner or something. Here’s what I can recall of “Shalka:” the Doctor seeks out a race of burrowing worm-like aliens.

For me, “Scream of the Shalka” is the first Doctor Who story I ever watched from beginning to end. I can never loathe it.

The BBC is so confident in the Doctor Who brand that it released a Scream of the Shalka DVD in October 2013. As of November 2013, Internet Explorer users can still watch the “Shalka” webcast. The check for the Flash browser plugin that excludes non-IE browsers is such poor programming.

The “REG Doctor” was soon shelved as soon as it was announced that Doctor Who would return to television. The only other story from this Doctor is the short story, “Feast of the Stone.”

I was really into pinball back in the day. Even though I couldn’t really recognize anyone on the machine or didn’t care what this “Doctor Who” was, the music still stuck with me.

The mid-1960s pepper pot-loving craze gave a boost to the TV show. Terry Nation’s scourges from Skaro starred in two adaptations of Doctor Who, Dr. Who and the Daleks and Daleks — Invasion Earth 2150 A.D.

Watch the trailer for Dr. Who and the Daleks, with Peter Cushing:

On the other hand, Doctor Who wasn’t so hot during much of the 90s. There was the 1996 TV movie with a fine performance from Paul McGann. However, McGann and a muddled plot couldn’t convince a substantial U.S. audience to tune in.

Certainly, reading books about the Seventh and Eighth Doctors’ adventures, Gallifreyan-spawning Looms and all, would be preferable than the lame 20th anniversary special, Dimensions in Time. Dimensions is a crossover between Doctor Who and the soap opera Eastenders partially taking place in 2013, where flares are apparently “in.”

What other alternatives were there for Whovians during the “Wilderness Years?” A husband and wife team, Bill and Helen “Ben” Baggs, somehow managed to make several videos using actors who have appeared on Doctor Who. In some videos, they secured the rights to use some familiar characters the BBC didn’t own.

The adventures varied to quasi-Doctor tales, spinoffs using said familiar characters, and even a change of pace where Doctor Who actors are used, but in a context far away from Doctor Who.

See the multi-Doctor reunion you WEREN’T waiting for:

Check out the Airzone Solution oddness on YouTube, if you must.

The 1980s were the John Nathan-Turner decade. The Hawaiian shirt-wearing producer helmed the show throughout the decade. He held the show up when no one else did until the show bowed out in December 1989.

The Three Doctor Who Years Videos

How did BBC celebrate the classic series when Doctor Who returned in 2005? Have production company SVS and fan Ed Stradling devise a series of highlights from the show’s history. Each episode represents a decade and features the popular music of the day. All three videos are still available in Windows Media Video format from the BBC website.

What do devoted Whovians with the knowledge of lost/wiped episodes? They take whatever remaining footage, photos, and audio is available and distribute reconstructions of classic stories. Loose Cannon Productions specializes in these reconstructions, but they’re only available from them in VHS format upon request.

I did see one (I think it was “Fury from the Deep” with the Second Doctor) and it was decent. The reconstruction even featured scenes reconstructed with CGI.

More recently, there are some official BBC releases (“The Invasion,” “The Tenth Planet”) that fill out missing episodes with their own animated reconstructions. Whatever footage remains, I hope more people get to check out the brilliance of the 1960s Doctor Who, especially Patrick Troughton.

Ah, the spectacle where our heroes and villains gather peacefully. I’ve been in awe at conventions that get popular Doctor Who personalities to participate. One con that comes to mind is Gallifrey One, the amazing Doctor Who con held in Los Angeles.

What’s the craziest cosplay seen at a Doctor Who convention?