It’s time for another madcap animated adventure starring the Wingman, Three Kids, Fourth Wall, Buzzkill, and Tight Ship fighting terrorism wherever it terrorizes. Um… this is not the G.I. Joe show I remembered from my childhood.

For G.I. Joe fans who don’t watch Community, creator Dan Harmon loves to experiment with his show while somehow maintaining some pathos. The base premise for most of Community’s existence involves a ragtag bunch of community college students, led by ex-lawyer Jeff Winger. They’ve done animated episodes like the claymation Christmas one and the 8-bit video game adventure.

“G.I. Jeff” is an funny, action-packed episode filled with homages to the 1980s G.I. Joe cartoon, but it’s really about Jeff Winger finding an escape from cruel reality. There are many cartoon tropes in effect, especially about the less-than-stellar production values of the day. Yes, both the forces of G.I. Joe and Cobra are present. Original voice actors Michael Bell, Bill Ratner, and Mary McDonald-Lewis play Duke, Flint, and Scarlet.

Unfortunately, this episode will likely get pummeled by Big Bang Theory in the ratings. But some editors of TV Tropes are probably in an infinite loop of squee.

The opening to the show is fantastic. “The bad guys are snakes and the good guys are army people.”

For older browsers, download this video. Otherwise, watch it below:

Honorable mention to the retro commercials. They serve to frame the plot with young Jeff playing G.I. Joe with his friends. It’s who Jeff used to be interacting with who Jeff wanted to be. 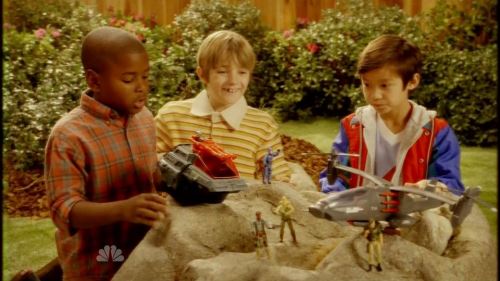 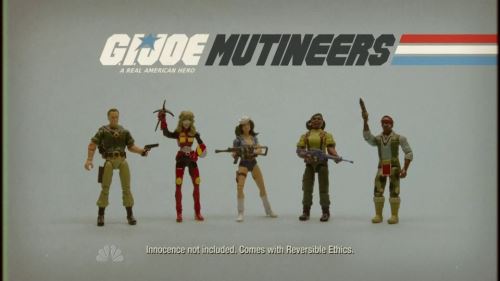 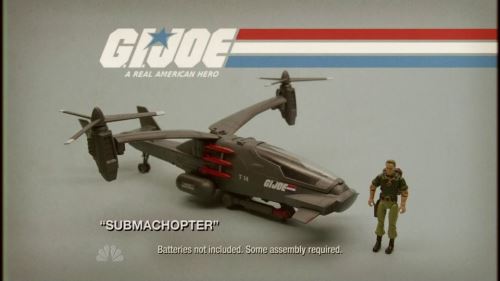 I’m not an action figure guy, I’d consider getting the Mutineers and the Submachopter.

This is the first indication that this isn’t a cartoon and something isn’t quite right. Jeff was an avid viewer of G.I. Joe as a kid and now freed from the shackles of adult responsibility, he can fulfill his egotistical fantasy of finishing off Destro.

Fans of the G.I. Joe cartoon know that no one dies, especially if their aircraft is shot. They typically eject then parachute to safety. This time, Wingman just shoots Destro’s parachute resulting in the chrome-domed villain falling to the death. Wingman celebrates, but the G.I. Joe team is appalled.

This is one of many hints that “G.I. Jeff” isn’t mere parody.

Hasbro DID give Dan Harmon permission to use the G.I. Joe characters.

The weird thing was how cooperative they were. Not that we maligned their product in any way, but their product is a syndicated, children’s cartoon with a different rating than ours, so it’s like part of the point of the episode is that there’s a different sensibility within this world.

Hasbro’s okay makes “G.I. Jeff” far more engaging than if Wingman and his crew fought something like the “Armed Forces Andys.” Thanks, Hasbro, for having a sense of humor.

Hasbro are such good sports that they’ve sanctioned something never done outside of children’s playtime: the combined G.I. Joe and Cobra forces fighting against Wingman. Go Joebra! 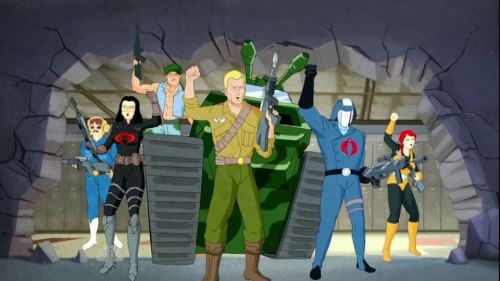