I’m digging this season’s half-hour shows. To capture the essence of CBM, you’d have to watch the interactions between the Stash staff and the customers. What makes CBM distinct is the guys’ nerdy/geeky/dorky banter. It’s interesting to see a conversation about George Lucas’ great shame, the Star Wars Holiday Special, in light Disney taking over the whole franchise. Heh. This episode may be one of the most entertaining yet. 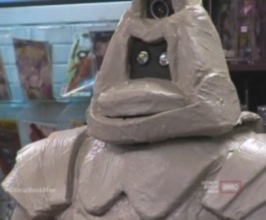 Big day at Secret Stash because Kevin Smith’s signing his latest book and Jason Mewes runs security. Fun to be had? Yeah, for his fans including the guy who got an autograph above his back tattoo of Jay kissing Silent Bob and the guy at the end of the line who got a $100 gift certificate.

There’s a Mecha-Kong outfit based on the movie King Kong Escapes; its wearer values it at $1100. No sale, but the guy gets to re-enact some destruction in the store and gets to keep a toy car. I had no idea Toho had further involvement with King Kong until I saw this episode. 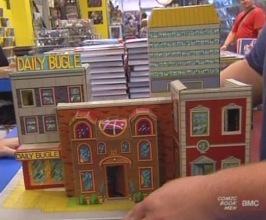 A Kiss fan purchases Marvel Kiss comics for $250 along with some chatter about Kiss members’ blood getting put in the ink and Walt emerging from Barry Manilow to being a fan of the men in paint.

Finally, Walt personally wants a Marvel World playset a customer brings in. Kevin’s brought in to do the deal because Walt’s getting emotional. The owner asks for $600; Kevin buys it as a gift for Walt. Very cool moment.