“Avengers Assemble!” The big finale for the scrapped-too-soon toon series.

What a long, strange trip. I’m not talking about the intergalactic adventures of Captain America, Ms. Marvel, Mar-Vell, Vision, Thor, Black Panther & Hawkeye in the penultimate episode. The constant stop-and-go scheduling by Disney XD made me less interested in EMH new episodes. I resign to accepting this reality of Kiddie TV (I’m also looking at you, Tron).

I feel there may have been something missing between the Avengers’ encounter with the Kree Supreme Intelligence and their final battle with Galactus. I’ve forgotten about the Asgardian drama with Surtur. This finish of EMH is still satisfactory, though.

In the finale, the Avengers indeed assemble an all-star cast to defeat Galactus and his elemental-themed heralds (Air-Walker, Firelord, Stardust, Terrax). I’m not wild on the execution of Spider-Man and Wolverine fighting major extraterrestial threats, but they’re still more than welcome. I did like the groupings: 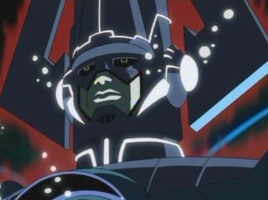 Earth’s saved and the Avengers and their allies are cheered as grand champions. Not the big finish I expected, but I prefer that over any imagined ending to Ultimate Spider-Man. Yuck! I don’t know if I can watch another episode of that.

Many thanks to the cast & crew, including Brian Bloom, Eric Loomis, Joshua Fine, Christopher Yost, and many, many, others. You excellent men and women were the sensational character finds of the 2010s!