I get a weird Saturday morning cartoon vibe from watching the first episode. It’s difficult for me describe why. Maybe it’s because the cartoon is made for people familiar with the Marvel Cinematic Universe. Maybe it’s because of the cackling villainy of the Red Skull and his tag-team partner Modok. 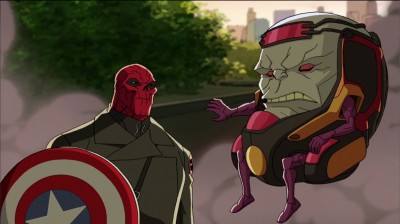 Judging how Avengers Assemble will turn out because of one episode, the first in a two-parter, isn’t quite fair. I just really enjoyed Earth’s Mightiest Heroes and I’ll have to get used to these guys. I thought that Eric Loomis’ Iron Man/Tony Stark on EMH was excellent. Hearing Adrian Pasdar using Tony’s Downey-esque smarm charm is jarring at the moment.

“Avengers Protocol” isn’t a reboot or an origin story. You can stretch your imagination to believe that this follows the EMH episode, “Avengers Assemble.” It’s more plausible that this follows the Avengers movie. The Avengers have broken up and Tony spies on his old members. It takes Red Skull’s vaporizing of Captain America to get the band back together via Stark’s persuasion. In addition to Thor, Hulk, Hawkeye, and Black Widow, Sam Wilson joins the Avengers donning the Stark-made Falcon armor (not the War Machine armor Tony prefers, hmmm). 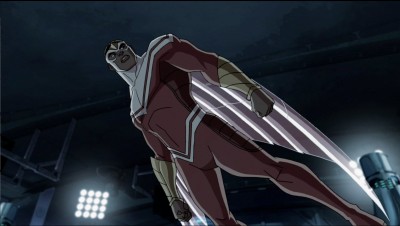 As expected when superheroes are supervillains are involved, “Avengers Protocol” has plenty of fighty-fight stuff. There’s tension between Thor and the Hulk. Tony Stark seeks to avenge Captain America and shows everyone he’s not a smug, stony-hearted capitalist. Nick Fury of S.H.I.E.L.D. is in the background… being in the background. The 360-degree pan to show off the Avengers is used again, but it’s low-budget and far less dynamic.

The Red Skull is shown to be a greedy man persistent in his scheming. At the end of the episode, Skull makes another power grab, but I don’t he has thought his plan all the way through. The episode is a decent start to Assemble and at least it’s not offensively wacky like Ultimate Spider-Man.

Avengers Assemble premieres on 26 May on Disney XD.