I’ll keep watching Avengers Assemble for awhile, but it’s definitely not the next animated masterpiece like Spectacular Spider-Man. I realize that 12-year-old me and my 12-year-old friends wouldn’t care about quality if this came along long ago. “Avengers Protocol” is mildly entertaining, but Assemble shouldn’t seek to condescend to tween/teen audiences.

One annoyance about “Avengers Protocol” is how the script can’t help to remind us that Tony Stark is or wants to be a leader. I understood all that when Tony tries to bring back the Avengers in the wake of Captain America’s disappearance. Add to that some lines of dialogue that are either aim to please (“I’m always angry!”) or are too upfront about character quirks (almost anything about Falcon, who becomes Stark’s trusted protege) and Assemble starts to feel like a very watered-down version of the Marvel Cinematic Universe. 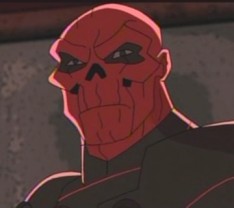 The plot: Red, excuse me, Iron Skull, and Modok have the ability to manipulate the Avengers to turn on each other but the two supervillains are only content with having the mighty heroes off each other? Why couldn’t they just turn the Avengers loose against New York City and let destruction reign. Wouldn’t Skull showing that he can have the Avengers do his bidding better persuade his evil peers?

That said, it’s a cool to see Skull forming his own Legion of Doom… er, Cabal with Attuma (usually a Namor villain), Doctor Doom, and a blond Dracula. Through Skull’s appeal and the inclusion of elements of Spider-Man (Spidey’s mentioned by Nick Fury in part 1 and J. Jonah Jameson covers the big Avengers free-for-all), I am intrigued by how Avengers Assemble blends stuff from the 616 Comic Universe and the Cinematic Universe. There’s vague tension between Hawkeye and Black Widow that could get overshadowed. Those two will need their own episode.

I also like that the Avengers genuinely get along with each other. Thor, Falcon, Iron Man, and Hulk contain a explosion that could vaporize Manhattan while Captain America, Hawkeye, Black Widow did crowd control. Their combined egos didn’t threaten to sink New York City, thank goodness.

But then, it’s implied from these events and other dialogue that the Battle of Manhattan from the Avengers movie didn’t happen. If you want to make a chart of the Avengers Assemble continuity, be my guest. 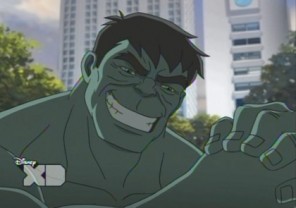 Adrian Pasdar shouldn’t try to out-Downey Downey in his Iron Man performance. His voice fits for calm authority instead of a flat attempt at smart-aleck Shellhead. I didn’t mind the other voice actors. Fred Tascatiore should voice Hulk as long as he wants.

On another Hulk-related note, I’m looking forward to Agents of S.M.A.S.H.

Also, that fake-letterbox thing done in certain places is a bit odd. It would’ve been a cool touch 15 or even 10 years ago when many people didn’t have widescreen monitors and TVs. Now, it looks like it may block visual information for the sake of resembling the movies for a few seconds.

Then again, the way letterboxes are used along with the split-screens establishes Avengers Assemble as a something between comic book and movie. Assemble should aim for the best of both worlds. I’m containing my enthusiasm for the moment, though.