Agents of S.H.I.E.L.D. is a pleasant diversion, but my mind still isn’t blown yet. After three episodes, Coulson has his team and plane intact, Ward shows leadership ability, and Skye finally is put into action. No one individual, even Coulson, represents Agents’ greatest asset that will keep people watching. I’ll go further after I’ll recap “The Asset.”

“Asset” has Skye in a field mission retrieving scientist Franklin Hall from the clutches of Ian Quinn, a rogue-capitalist-scientist guy. The kidnapped Hall is in Malta, where S.H.I.E.L.D. has no authority. S.H.I.E.L.D. intervening during Quinn’s big convention would cause an international incident. In risking her life, Skye uses the opportunity to show her value to Coulson’s team. This episode is the first time I’ve actually liked Skye.

The opening scene has vehicles, one of which contains The Asset, mysteriously lifted into the air. Ultimately, devices that contain Gravitonium, a super-rare element that alters gravity, are responsible. The villain wants to further the technology into a massive device and the kidnapped scientist must complete its development. For rescuing the scientist, it’s up to Skye, infiltrating the villain’s compound, along with Ward and Coulson, prepared to breach the perimeter when the deadly force field goes down.

I don’t hate this adventure. However, I immediately knew Skye’s gambit of revealing to Quinn that S.H.I.E.L.D. is listening to them. The audience is supposed to be shocked that Skye turns on S.H.I.E.L.D. so quickly. That’s supposed to be, as if audiences thought Skye would really shed S.H.I.E.L.D. The one genuine twist in “Asset” sets up a future supervillain.

Take a wild guess where the twist comes from. Marvel Comics experts should know. 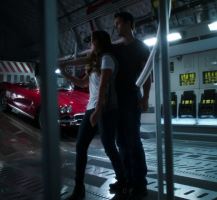 I’m mellowing on Chloe Bennet’s Skye in spite of her character’s iffy background. She’s a computer scientist-turned-hacktivist who dropped out of high school but can charm people like a spy? Anyway, Skye’s real hacking skill is social engineering; Agents should fully embrace that. She gets her obligatory bonding scenes with Ward. Agent Ward teaches Skye boxing and gun-grabbing. Skye doesn’t take Ward seriously at first, but OF COURSE she takes her lessons after getting to be the heroine.

Melinda May is serious, as usual, and Fitz-Simmons are infodumping nerds getting picked on for wordiness. Coulson is his typical steady self.

What IS Agents’ greatest asset. The cast is not that awesome overall, so it’s not anyone. That asset is Marvel. By being tied to the Marvel Cinemeatic Universe, Agents can make the absurd stuff, like Gravitonium, easier to swallow. With an audience eager for anything Marvel, the ratings for Agents should stabilize soon to give the show a second season. Marvel has a huge assortment of minor villains, like the one “created” during the closing scene.

I don’t see a standout in the Agents cast so far. But what do YOU think is Agents of S.H.I.E.L.D.’s greatest asset?