THERE he is! For about 67 seconds, Nick Fury scolding Agent Coulson stood out that it made the preceding 40 minutes a little dull. With the dramatic drop in ratings and mildly enthusiastic reponse over the Interwebs*, Agents of S.H.I.E.L.D. has become just another show.

* – From my sampling of reviews.

Maybe it’s the TV budget constraints. Maybe there are too many cast members. While Agents is decent entertainment, I’m still not convinced how Whedonized S.H.I.E.L.D. is so much more special than any other agency. I sense there will be Agents apologists swarming all over social media and message boards over the coming months.

In the wilds of a convenient sound stage, the group finds an unknown metallic object, classified as an “0-8-4.” Coulson’s team is in Peru, but they’re never really in Peru. There, the agents are caught in a conflict between Peruvian military and rebels. Their military is led by Coulson’s Old Flame, Reyes (Leonor Varela), and get to tag along with S.H.I.E.L.D. and the mysterious object in the plane.

The “0-8-4” has gamma radiation and something-something-Tesseract-something. What could that power do? Thanks to Fitz & Simmon’s little flying doohickey, blow a hole on the side of the plane to disrupt a hijacking. Guess who’s behind the hijacking? (Your first guess is probably correct.) Even better, why would these hijackers target people where they have a significant tech advantage?

The set piece in the falling plane is alright, but it could’ve had more tension. I wondered whether Ward would consider letting one of the hijackers live or die. However, Ward’s too experienced and hardened for that.

In these first episodes, it’s deliberate that Skye isn’t very useful. But that doesn’t make her a compelling character. Just ask Jar Jar Binks. Skye, lacking hacking skills or a knack for analysis, does little until the climax. Afterwards, Skye is shown to be…spying for the hacktivist group Rising Tide. With her immense beauty, Skye should have been a spy from the beginning. It doesn’t help that Chloe Bennett is sometimes behaving like she’s on another type of show.

Melinda May’s fighting prowess is redoubtable, but she’s not the awesome scene-stealer that Diana Rigg’s Emma Peel or even Jackie Earl Haley’s Guerrero were. We know she’s serious business, but Ming-Na Wen plays her as annoying stoic. With a wry smile, she finally opens up as a human being while talking to Ward in the aftermath.

Too bad that conversation is all about getting young people to notice the oncoming relationship between Agents’ young, pretty people. 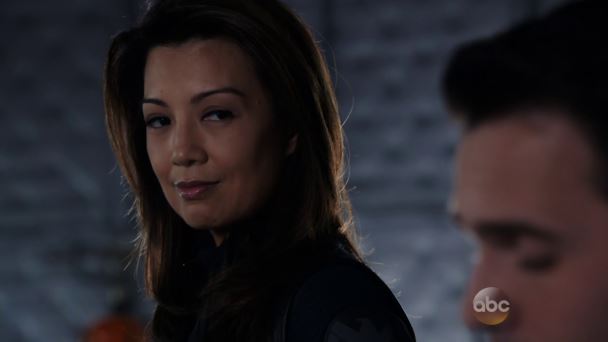 NEXT WEEK: Coulson and his agents seek “The Asset.”