A certain new Spidey film franchise is about to start. Spider-Man and the Lizard are fighting already in the latest Amazing Spider-Man comic book arc. But let’s go back to when Webhead was a relative greenhorn…

The wonder of limited TV animation, where most of the characters are redheads and they never drawn all the webs on Spider-Man’s costume. This version of Spidey would go on to become an Internet superstar. END_OF_DOCUMENT_TOKEN_TO_BE_REPLACED

Is this XBox game…AMAZING? SPOILERS ABOUND!

You start off being introduced to the fact that this game takes place AFTER the movie. You walk into OSCORP with Gwen and are immediately looking for trouble. Gwen has heard that people are still continuing Dr. Connors’ Cross-Species experiments and wants to make sure that she can put an end to it. While combing around the lab area, Gwen and Peter catch a glimpse of the Rhino (who is a Cross-Species where human DNA was introduced into a Rhino) when they are met by the new CEO of OSCORP, Alistaire Smythe (most famous in the Spider-Man Animated Series back in the 90’s). END_OF_DOCUMENT_TOKEN_TO_BE_REPLACED

[This post was made after watching S01E02 – Great Responsibility; thoughts on S01E01 later???]

I had expectations that Ultimate would be decent even after being disappointed that the Powers That Be discontinued the great Spectacular Spider-Man. While Spectacular can never be the greatest superhero adaptation due to unfinished stories, Ultimate is threatening to be one of the worst. END_OF_DOCUMENT_TOKEN_TO_BE_REPLACED

Kaine. Who would have thought ANYTHING from the ‘Clone Saga’ blunder could affect the here and now? Regardless, it’s a good read. ‘Scarlet Spider’ #1 takes place immediately after the events of ‘Spider Island’ (get it while you can!). Now a fugitive from the law, Kaine must now remain on the run from everyone…EVERYONE. You name a group, faction or agency, they are after him. If you can’t get all of the ‘Spider-Island’ series, at least pick up Marvel’s ‘Point One’ one-shot. This issue marks the official start in the new life of the Scarlet Spider.

Now that he is cured of his mental ailments, Kaine now has a chance to live his own life. And being a genetic clone of Peter Parker but not having the same upbringing, he must now figure out why he has this “nagging” sense of responsibility. It gets him into trouble half-way through the book after he hears a lady buried amongst the dead and digs her out. Even though he was trying to do the right thing, it just causes him to get into a problem that wasn’t his to begin with. Or at least not the brooding Kaine were just introduced to. Though he is cured of his mental problems, he still looks to the mental image of Peter Parker for approval. You can tell he looks up to him like he was his bigger, more popular, brother. With a new costume and some newer powers, THIS is the dark vigilante character that the Spider-family has been in need of for a long time. 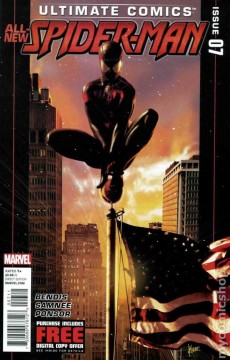 Ultimate Spider-Man issue 7 is a spectacular read. The inter-weaving of the Peter Parker Spider-Man mythos with Miles Morales is an astounding piece of work which teases the reader with surprises for the long haul.