Leading up to the Avengers movie, we are going to be reviewing some of the current developments of work that deal with our favorite Marvel Super-Team. Today is no different. The first seven episodes of this new cartoon series are amazing. Each episode leads up to the assembling of the Avengers. You get an introduction to every character and even a few surprises in the form of cameos.

END_OF_DOCUMENT_TOKEN_TO_BE_REPLACED 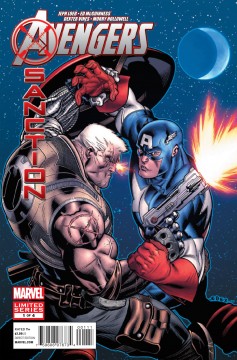 This series has not disappointed AT ALL. Even if you have no idea what is going on in current Avengers or X-titles, and I really don’t, then you can still love this series. For one, it has Cable. Cable is one of the coolest characters in the Marvel U and this is definitely his book to shine in. You get to see Cable play Judge, Jury and Executioner in this title. THAT’S the Cable I remember from the early 90’s. And what is there even possibly NOT to like about the team of EdEx? Ed McGuinness and Dexter Vines have brought something that was much needed back to the table. Big muscles on big heroes with a smooth animated feel to round them out. I, personally, would love to see an animated series based on their art syle. I digress. END_OF_DOCUMENT_TOKEN_TO_BE_REPLACED 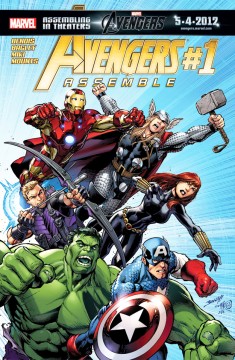 Just picked it up! I had to as soon as I saw it had Brian Michael Bendis, Mark Bagley, Danny Miki and Paul Mounts as the team behind it. As soon as I opened it up, I figured I would like it. I love the way Bagley brings his characters to life. I even like the way the villains were “assembled”. It makes sense. The overall delivery of this book gets a 6 from me. I only marked it down because I was thinking that this was going to somehow tie-in to the upcoming Avengers movie. Was I wrong to believe that? Are they NOT the characters from the movie on the cover? Color me stupid but isn’t creating a new book dubbed “Avengers Assemble” and then putting all the characters from a movie that is coming out soon WHILE advertising said movie at the top of the cover kind of like false advertising? I mean, seriously? I bought the book for two reasons:
1) The team of Brian Michael Bendis, Mark Bagley, Danny Miki and Paul Mounts.
2) Because I thought it was somehow related to the movie.
I kind of feel cheated by buying this now. The story was alright (at best) but I was let down because of the reasons I actually bought the book. Needless to say, it gets a 6 based on the art and the camaraderie shown. They have obviously tacked onto more of the Avengers’ history so I will continue to see where this is going.