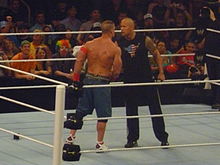 HUSTLE: Cena cannot and SHOULD NOT disappoint against the best-known superstar he has ever faced. The man is pure hard work; he displays full dedication to being at the top off the WWE roster. Cena goes out of his way for the fans, especially the fans at the Make-a-Wish Foundation. His eye was on championship gold even when his best childhood prize was made of cardboard. When we look back at wrestling history, John Cena is the man defining this grand current era of grappling. END_OF_DOCUMENT_TOKEN_TO_BE_REPLACED

The Rock versus John Cena. The crowd is electrified with excitement at seeing The Rock whoops John Cena’s candy-ass in Miami: a Rock-Bottom followed by a People’s Elbow and then an STFU to finish him off (and give him some advice). Dust stains the air around the ring…and when it clears? The Rock is standing victorious on the turnbuckle with one arm raised.

OK. That would be the perfect ending to WrestleMania for me. That’s because I’ve been a fan of Dwayne Johnson’s since he was “The Blue Chipper”, Rocky Maivia. END_OF_DOCUMENT_TOKEN_TO_BE_REPLACED