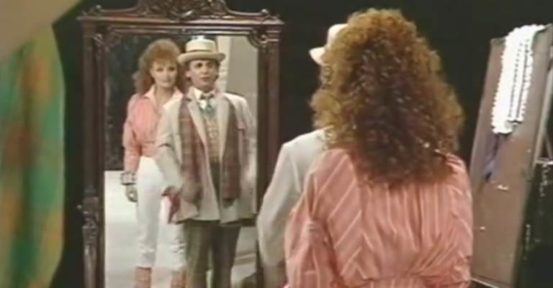 Doctor Who, for much of the late 80s, was spotty at best. Maybe that’s why Kate O’Mara’s Rani isn’t as revered as the other legendary baddies. The Rani is a Time Lady, the same alien race as The Doctor, who was a cold, EEEVIL scientist. O’Mara played The Rani in “Mark of the Rani,” “Time and the Rani,” and “Dimensions in Time.” Those three stories are hardly the pinnacle of Doctor Who stories. END_OF_DOCUMENT_TOKEN_TO_BE_REPLACED

Congratulations, BBC, for fifty years of wandering through time and space. The big anniversary episode should be better than Dimensions of Time and maybe The Five Doctors. I’m gathering several points of Doctor Who-related nostalgia, but there will none of that Tom Baker wax dummy nonsense. Nope.

I don’t have the best vantage point for these items, not being born until long after Doctor Who premiered and not being British. That doesn’t deter me from crafting this list of the peaks of valleys of Doctor Who history. END_OF_DOCUMENT_TOKEN_TO_BE_REPLACED

Prisoners of Time #12 is the mutli-Doctor, multi-companion finale to the almost year-long saga. Issue written by Scott & David Tipton, drawn by Kelly Yates, and colored by Charlie Kirchoff. Also featuring a variant cover by Dave Sim.

Doctor Who Classics Volume 9 has seven stories from the pages of Doctor Who Magazine. The preview excerpts “Time and Tide,” written by Richard Starkings and John Carnell, and drawn by Dougie Braithwaite and Dave Elliot. END_OF_DOCUMENT_TOKEN_TO_BE_REPLACED

Maybe IDW’s colorized comics of 80s favorites will appeal to you. If you’re a Whovian and a Ninja Turtles fan, these previews may REALLY compell you to get these comics this Wednesday. END_OF_DOCUMENT_TOKEN_TO_BE_REPLACED

This issue, which contains many pages on Dane and his life story, has cartoonier art but is no less effective than the previous issues. Identity of the man who walked in last issue should be obvious. We do see who’s orchestrating the plan behind getting Dane arrested and employing Hoodie. That person’s known to have plenty of resources; McCann didn’t do a deceitful swerve here. If Elle’s your favorite character to watch in Gap then this issue may be disappointing.

If you pay attention to the asymmetrical main cover, there’s a hint as to why Elle is a target. The “why” of this mystery is more important than the “who did it.” In spite of the big reveal, Gap #5 isn’t a deterrent from continuing this fine series.

The Borg and Cybermen are in conflict and Captain Picard is content at that.

First half’s full of exposition that only complete newbies to either Trek or Who wouldn’t know. Second part improves the Doctor tries his own way of convincing Picard via TARDIS.

Rory and Amy don’t bring balance to the argument between the Doctor and the Captain, but they provide sensible human insight.

Preview this issue at StarTrek.com!

Right from the covers, I was hooked. Being both a ST:TNG and Doctor Who fan, I thought of this as a dream team come to life.

END_OF_DOCUMENT_TOKEN_TO_BE_REPLACED Let’s wrap up Game Show Week with a look at two feisty Redheads of the Day: END_OF_DOCUMENT_TOKEN_TO_BE_REPLACED