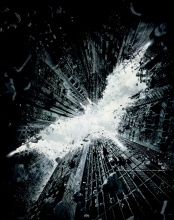 The Dark Knight Rises is an excellent conclusion to probably the best superhero movie saga in terms of quality. Rises is not a perfect movie and it’s not as fun as The Avengers but Rises still satisfies. Director Christopher Nolan made this movie is a final love letter to loyal Bat fans while remaining dramatically accessible.

Rises is about the nature of heroism. In the final chapter of the Dark Knight Trilogy, Bane executes a major plan to take over Gotham City (Pittsburgh with a coastline!). Bane, built like a classic pro wrestler, shows great cunning in his power grab. Meanwhile, catburglar Selina Kyle prefers, initially, to take whatever valuables she targets.

What about Bruce Wayne? He’s not the man he used to be after leaving the Batman identity behind eight years after Harvey Dent’s death. After meeting Selina, Bruce eventually gains the non-stop fighting spirit and gets into the suit again. END_OF_DOCUMENT_TOKEN_TO_BE_REPLACED