First off, this was the view from our room. AMAZING  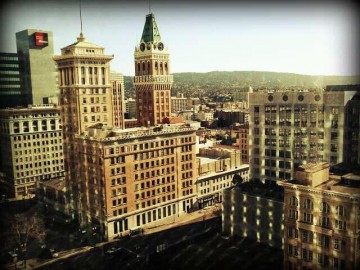 The show starts at 10 the next day (Saturday the 25th of February). I raced to get ready and got everyone breakfast. We walked down to the exhibit hall at 0945. There was a bigger line, but not anything as big as Wonder Con. We got in the MVP line. The excitement is uncontainable! The doors open. I rush to Ryan Ottley first! I pulled out my book and walked over to his booth. The look on his face…he knew I would be back. I pulled out my money to pay the kind sir and was on my way to rest of the convention. 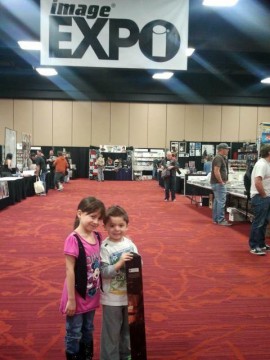 END_OF_DOCUMENT_TOKEN_TO_BE_REPLACED

Another Fringeless week
so little to speak.
Will our great show end
When Peter goes to mend
Fractured realities,
Pains and maladies?

Another Fringeless week
Has Walter eaten a leek?
Might lower blood pressure.
Nah, where Escher?
Maybe a spirited call
Untangles then ends it all.

The preceding may not match one-to-one with the current plot but I hope you find it enjoyable.

I remember the day I found out there would be an Image Expo. It was a few weeks after finding out that WonderCon would not be held in San Francisco this year. It made my day. I started to remember all the times I had visited the Image booth at WonderCon and, looking back, it’s the only place I KEPT going back to. Weird enough, I had only been collecting four Image titles at that time (Haunt, Elephantmen, The Walking Dead and Invincible). Regardless of not knowing too much about what was going on in Image, I decided I would pay the $300 ($150 apiece) for the MVP passes for me and my wife*.

Months went by. I wanted the convention to happen already! I would check the website (http://www.imagecomicexpo.com/ ) every day. I would get more and more excited when they’d update the site with new exclusives! After months of preparing for the convention (in mind, body and soul), it was finally upon me! I was on my way to Oakland! END_OF_DOCUMENT_TOKEN_TO_BE_REPLACED

Chiptunes are fine pieces of aural digital nostalgia. Maestros of the microprocessor doing awesome bleep-bloop expressions are plentiful such as CHICKENANDROFLS. Here are some themed selections. END_OF_DOCUMENT_TOKEN_TO_BE_REPLACED

Whew. After way too many hours than I expected the site is now in a publicly viewable state. To future webmasters: it’s good to build up your CSS-Fu.

The current design is functional and should be satisfactory. If you want to complain please send your site-related rant at webmaster@redheadedmule.com.

Also, you’ll see plenty of me and Roshawn’s contributions to fill the site with great content.

Thank you for listening. Lots in chatter including Roshawn’s experiences at the Image Expo.

Please excuse this mess. In the meantime, read the articles over at old RHM or see the Twitter feed on right-hand column.

YEAH BABY, we’re on the MOVE!