I am going to try and tackle this one from all sides. Mirage, Nickelodeon, IDW…you name it. If you are a fan of the Mirage Teenage Mutant Ninja Turtles (TMNT) you will walk out of the movie liking the teamwork and violence in it.

If you are a Nickelodeon comic fan, then you will like Michelangelo… that’s it. If you are an IDW fan, this is as close to perfect as you can ever hope to imagine. With that in mind, I will explain the reasons why I absolutely loved this movie.

The origin story can only be told so many times. The original movie touched on it and then the follow-up, Secret of the Ooze, revised what we thought was right from the first movie. However, the difference in this movie is that the origin has changed significantly. As a fan of the new IDW series, I was digging the new origin. The origin is still very much representing the old one; it just has a lot more to do with April O’Neil now. I will touch on that some more later.

I really enjoyed the detail that Bay and team put into creating the Turtles for a new generation. Even though the old rubber suits hold up, there is only so much a person can do in them. The idea of a CGI Turtle is way more logical to me as we are supposed to be seeing them pull off insane feats of heroism. And pull off they did in this movie. The action in this movie was CRAZY good! Every scene with the Turtles was crazy eye candy.

The fighting was intense and even played to each characters weapon very well. And the Shredder. OH BOY!! I’ve never seen him so ruthless before! Hands down, this was the coolest rendition of him I have ever seen. And the incorporation of technology to his armor made the movie more fun! I know it left me on the edge of my seat more than a few times. And those weren’t the only things about the movie that were great. 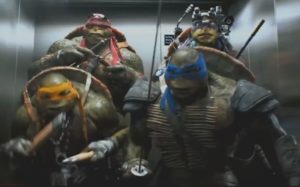 The voice acting was phenomenal. I, initially, was worried when they stated Johnny Knoxville was going to be taking over the voice acting for Leonardo. I just couldn’t IMAGINE him in that role. I was so wrong….and SOOO happy for it. Whoever was in charge of voice direction did a really good job in choosing him as there leader. It turns out that he can do a GREAT job not being a Jackass. Seriously. I actually believed that he was leading this team when he was giving orders.

As for the other actors, I have NEVER been as impressed with any other voice cast as much as I am with this movie. Noel Fisher (Shameless), Alan Ritchson (The Hunger Games: Catching Fire), Jeremy Howard (Galaxy Quest) and Tony Shalhoub (Monk) did amazing jobs portraying their characters. Seeing these guys in there past bodies of work, the only one I ever thought was going to pull it off was Alan Ritchson. He had played a great angry teenager in Catching Fire and an unruly force to be reckoned with as Arthur Curry (Aquaman) in the CW’s Smallville. I was more than happy with his performance.

Let’s not forget about the human aspects of this movie either though. Whoopi Goldberg, William Fichtner, Will Arnett, Tohoru Masamune, and Minae Noji also did great jobs. All of them played there parts to a “T” and were great supporting actors/actresses throughout this movie. I even enjoyed how they played with everyone when it came to the Shredder. I did NOT see that coming. However, out of everyone, I enjoyed Will Arnett’s performance the most. As Vern, you couldn’t have got any better of an actor to pull it off the way he did. 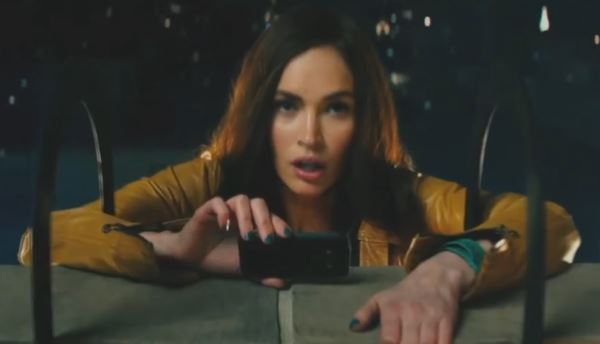 Now, here is something you won’t see me saying every day. Megan Fox played April wonderfully. Yes, I said Megan Fox and I will elaborate on why I think everyone hates on her in this movie as well. She did a really good job playing the kid that was thrown into this mess with the Turtles. I honestly don’t think anyone could have fit that part so well. And I’m not just saying it because she’s pretty. Lord knows I could go the rest of my life without watching Jennifer’s Body or Transformers: Revenge of the Fallen EVER AGAIN. I’m saying it because she actually had to show off some acting chops in this movie. With that being said, I think the powers that be may have relied on that a little too much for this movie.

I, like everyone else, do not need to see the human element of every story. I understand April played a huge part in the origin story. I just feel like the focus should’ve been more on the Turtles than on the human protagonist. You know, the Teenage Mutant Ninja Turtles? As with his other franchise, Transformers, I think Michael Bay relies too much on the human aspect of each story, as opposed to the title characters. I mean, I could watch an entire movie where the Turtles are fighting other mutants, or aliens for that matter (the Kraang), and not even see a human ONCE, as long as the story is good.

The only other issue I have with this movie was the look of Splinter. Even after seeing him in an AMAZING fight scene, I just cannot get behind that look. The creepy factor was just waaaaaaay too high for me. Maybe if he lost the chonmage hairstyle I could learn to love it. I was just a little too creeped out by the look though.

All-in-all, my whole family enjoyed this movie. There was a ton of laughs, action and even familial bonding amongst the cast that gave me a warm fuzzy feeling. My wife doesn’t even mind that we’re going to see it again as a family. When tickets are upwards $9, that’s saying something.

Personal Note: I did not catch the scene with Kevin Eastman and his wife where in the film. If someone could please point it out to me, I would be forever grateful.

Topper image source: IMPAwards.com
Some screencaps are from this trailer on YouTube uploaded by yhSection.