110 characters allows me to share key thoughts of works I’m reviewing and analyzing. This time, I cover the movie for and about 80s video game lovers, The Space Invaders.

My Commentary in MORE Than 110 Characters… 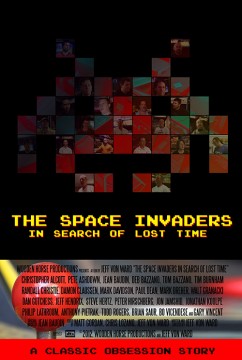 While pleasing to a hardened gamer like myself, The Space Invaders: In Search of Lost Time is not a thorough history of arcade video games. It does discuss fighting games and Nintendo marking the end of an era, though. Checking out impressive home arcades isn’t much of a narrative. In contrast, King of Kong and Chasing Ghosts, two movies also covering classic arcade games and their expert players, have their participants become champions and heels.

That said, I DO want to chat with these people about the classics and play some of the obscure games instead of fiddle around with emulators.

I’m left in awe seeing these guys follow and rigorously maintain their childhood passion of classic arcade games even if their power bill must be staggering. Anyone with an appreciation of video games should watch this film.

The Space Invaders: In Search of Lost Time is directed by Jeff Von Ward. Movie was seen via Amazon Instant Video.