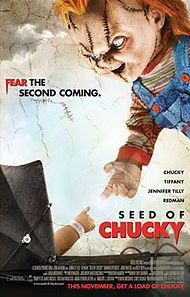 I remember liking Bride of Chucky long ago. However, Seed of Chucky is practically a sitcom. Seed contains some mediocre quality special effects and jokes. I was wondering if Universal put a small, low-budget studio in charge of production. 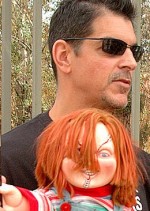 Chucky and Tiffany struggle with family life: the indignity of being Hollywood puppets, arguing whether they should pursue their true calling, & deciding which souls to transfer to this time. The plot doesn’t have raised stakes, but it has the innovation of having live-action Jennifer Tilly involved. Tilly does the best she can as fading movie ditz Jennifer Tilly. Brad Dourif doesn’t skip a beat voicing Chucky. Billy Boyd, probably doing a Russell Brand impression, voices the newest addition to the Ray family, Glen. After Glen’s introduced to his parent, the movie uses Glen’s vague anatomy as a launchpad for transgendered gags disguised as Ed Wood homages.

The horror-movie violence was there, but it would’ve been more effective if I cared about any of the humans. Writer/director Don Mancini trades pathos for attempts at comedy greatness. While I laughed at some points of the movie, the Rays will not displace the Addams anytime soon. Also, Glen was only necessary for the final confrontation between the Rays and Tilly. Mancini should not have made Glen an mostly irrelevant wimp and should’ve given us a person to care about. Seed is not recommended unless you’re a Chucky completist.