Marvel’s Guardians of the Galaxy kept the positive momentum for its Cinematic Universe making over $160MM worldwide in its first weekend. My friend, Roshawn Rochester, thinks Guardians is the “movie of the summer.” Now there’s further reason to delight in Marvel’s spectacle: Bill Mantlo “thoroughly enjoyed” the movie according to his brother.

Bill Mantlo, comics writer and co-creator of Rocket Raccoon, has been incapacitated since an unfortunate accident while he was roller skating. There was LifeHealthPro’s in-depth article published a few years ago detailing his struggle. His brother, Michael, has been by his side and has communicated Mantlo’s status.

Fitting for a VIP and an architect of Marvel’s bustling franchise, the Mantlos received a special private screening of Guardians of the Galaxy. Michael Mantlo has assured the public via a Bleeding Cool interview that Bill’s “treated in an exceptionally fair manner” and that Marvel’s aiding in his care. 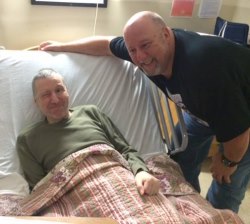 Over Facebook, Michael excitedly reports that Bill made “the hugest smile I have ever seen him wear” and that the day of the screening was the “greatest day of the last 22 years.” View his entire wondrous post and pictures at Bill Mantlo Fans Facebook group.

Another awesome moment is the end credit’s listing a partial Marvel creator pantheon, including Jack Kirby, Rocket Raccoon co-creator Keith Giffen, and Thanos creator Jim Starlin. Starlin, who also co-created Drax the Destroyer and created Gamora, raved about the Guardians movie and is working on new Thanos comics for Marvel.

This pleases me greatly. How about you?