The underground music scene in Washington D.C. forever altered the definition of punk, taking it from nihilism and pulling it towards something constructive. Within this unlikely town in 1979, generations, musical genres and powerful personalities created a volatile mix that has influenced music and culture around the world.

Punk the Capital, Straight from Washington D.C., directed and produced by veteran D.C. filmmakers James Schneider and Paul Bishow, captures the essence of D.C. punk from its source and steers shy of nostalgia, making this history relevant 35 years later.

Scheduled for completion in late 2014, Punk the Capital illuminates the early punk scene with a focus on the infamous Madams Organ artists collective. Stepping inside this anarchic rowhouse transports the viewer to the late 70’s, a time full of discovery and sense of possibility for well known figures such as Henry Rollins and Ian MacKaye. It was also where seminal bands such as the Bad Brains, Black Market Baby, and the Teen Idles took off and where the sound and ideas behind “D.C. harDCore” truly began.

Since then, D.C. punk continues to leave its mark on not just punk and rock, but on the broader American culture. “This documentary, ‘Punk the Capital’ is a portrait of how the small D.C. punk scene became a powerful entity,” says director James Schneider, “Even though the D.C. scene is the subject, punk is the story.”

James Schneider, a D.C. native who grew up in the skate and punk scene of the early-mid 1980s, has spent the last 20 years making and producing films. His filmography includes; Blue is Beautiful (1997) featuring Dischord recording artists The Make-up, The Band that Met the Sound Beneath (2012) featuring a Chilean punk band, and Young Oceans of Cinema (2011) which premiered at the 2012 edition of the Rotterdam International Film Festival. Schneider’s award-winning work has been screened at film festivals and museums around the world.

Paul Bishow moved to D.C. in the late 1970s and was immediately drawn to the intimacy of the punk scene. He was a founding member of the I am Eye Film Forum, and his footage has appeared in many documentaries including Don Lett’s Punk Attitude (2005) and Mandy Stein’s Bad Brains, Band in DC (2012). Mostly using Super-8 film, he made 8 feature length movies and dozens of short films. 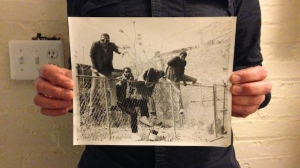 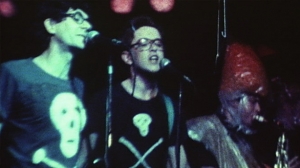 Over the last 12 years, Schneider and Bishow have been compiling concert footage, interviewing artists, and connecting with the people and ideas that changed music history forever. Punk the Capital takes us on a punk journey from the inside out, sharing the rich past of D.C.’s punk/harDCore scenes, and maybe more importantly, inspiring future generations.

Over 500 people joined in support of the film in the latest Kickstarter campaign as fundraiser to complete the film and even the Foo Fighters promoted the campaign by posting about it on their Facebook page.

Keep up with the progress of the project and join the active D.C punk history and by following Punk the Capital on Facebook http://www.facebook.com/punkthecapitaldocumentary, or visit http://www.dcpunkrockdoc.info/.

Known and Unknown Sounds from the Early DC Punk Scene

Interested in hearing a piece of music history? Docupunk filmmakers James Schneider and Paul Bishow have put together a playlist highlighting some of the bands appearing in their upcoming documentary Punk the Capital. Featuring D.C. punk staples The Bad Brains, The Slickee Boys and Black Market Baby, Schneider and Bishow’s playlist also includes rare tracks from lesser known bands on the D.C. scene.

Here are some of the hidden gems in the playlist:

In a city that was not culturally “on the map,” these bands were sound pioneers that opened doors and minds to new sounds. These are only some of the groups who were building a D.C. scene from scratch before the widely-known harDCore sound took hold.

The documentary, planned for release in late 2014, will explore D.C.’s punk scene from 1976-1984 and its effects on music and culture in the U.S. and the world.