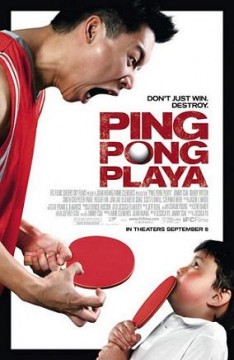 Are there Asian-American athletic heroes beyond Jeremy Lin and, in the past, Yao Ming? Christopher “C-Dub” Wang thinks he’s one. Ping Pong Playa is a typical sports movie jazzed up in an Asian-American flair. Also, as the title suggests, there’s some hip-hop culture infused in the movie through Jimmy Tsai‘s C-Dub & many of the loud soundtrack beats.

Maybe you’ve seen it: a crude, wacky guy is talented at a sport and proceeds to unleash his fury through a tournmeant leading to The Big Game against his Rival. C-Dub seems like an exaggerated version of Tsai amplifying the goofier parts of his personality. I laughed at C-Dub more than laugh with him. I wanted him to win that tournament to prevent shaming of his family instead of his winning me over. Unfortunately, an unintentional concern about the movie is that all Black people are good at are hip-hop (Holla!), hoops (Yo!), and hustling (Sup!). Khary Payton’s presence as Wang’s sole adult friend doesn’t ease this concern.

Was the plotting provided by writer/director Jessica Yu and writer Tsai rooted in too many Fresh Prince of Bel-Air episodes and Adam Sandler movies? Let’s go through a checklist:

The most likeable character, the person who I most wanted to shake my monitor and yell “You deserve better! Get out of there!” at is Andrew Vo’s Felix. Felix seems like he’ll become and adult who’ll easily combine hard work ethic and genuine affability. The movie is somewhat funny and is for people who like sports movie in general and enjoys broad stereotypes.