Kill ’em All is an almost plotless exhibition of style which is fine for anyone looking for action flicks. The film begins with vignettes of four assassins, The Kid (Tim Man), Som (Zom Ammara), Gabriel (Johnny Messner), and Black Scorpion (Ice Chongko). They, and several other assassins, are gathered in a danky room where the two of the worst draws engage in one-on-one battles. The winner will get earn one weapon from the weapons room. Rinse-and-repeat?

The purposed battles in the Killing Chamber could be the background story of a 1990s fighting game like Mortal Kombat. Halfway through the movie, however, Kill ’em All becomes a revenge movie. Some of the survivors plot an escape then kick-punch their way through even more hapless mooks and minions. There’s the expectedly spirited final fight with the mastermind/boss (Gordon Liu). While I don’t object with the premise or the fighting, the find-the-bad-guy portion involving ninjas and thugs are done so competently that it feels almost routine. 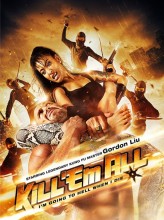 Stunt coordinator/choreographer Tim Man ensure the fights go along smoothly (unlike the occasional clunkiness of Salvage Mice) and sometimes have the combatants showcase their martial arts styles. Man’s character prefers swooping aerial kicks, for instance. The assassins are a colorful bunch, including obnoxious Schmidt (Erik Markus Scheutz), crazed spiritual quasi-monk Black Scorpion, the vaguely autistic Mickey (Rashid Phoenix), and the Americans Carpenter (a dignified Joe Lewis) and the slightly charismatic Gabriel. Just don’t get used to most of them.

On a spoilery note, it should be no surprise that Som, the most (or only?) notable female character, sticks around. Actress/singer Ammara Siripong displays ample martial arts ability. Most viewers will easily forgive her not delivering dialouge convincingly.

Kill ’em All’s premise feels like it’s fertile ground for many comic books and video games. In fact, one character even acknowledges that certain elements feel like they’re from a video game. No one’s going to see martial arts movies to look for memorable quotes. The action presented in the movie is very cool and fine. If you’re open to pure action in your action movie then Kill ’em All will be a fun 80-plus minutes for you.