Gut written and directed by Elias. 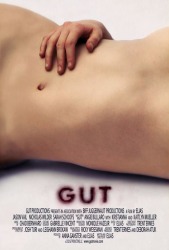 Low-key creepiness involving a two friends’ interest in gory flicks. Two friends, Tom and Dan (Jason Veil and Nicholas Wilder), experience their most trying time in their relationship over snuff films where a mysterious hand slices women’s torsos. Although the sickening special effects are well-done, Gut isn’t a slice-and-dice-fest. Instead, viewers are witnessing a two-man struggle.

Gut eschews splashy big-budget chills for personal-level horror. Tom is a family man while Dan is an oddball. The chemistry between Vail and Wilder is better than Vail and co-star Sarah Schoofs, who thanklessly plays Tom’s wife. Without Tom and Dan’s plausible friendship, the movie would be a chore to sit through. Both men have personal breakdowns, but who leaves with their dignity intact?

Hints are shown throughout the movie about the true nature of Tom and Dan. The ending suggests the identity of the malicious filmmaker while leaving some wiggle room for another possibility. Is that, along with the slow pace, the reason IMDb users give Gut a low score? I don’t know, but I wasn’t gutted to watch this interesting alternative to Hollywood horror.