An Irish-British horror flick where alcohol carries a signficant benefit? Even I’ll have a go at watching it. Grabbers is sometimes silly, but never rowdy. It’s an example of nodding at 1950s B-movie horror films without taking in their weaknesses. If one sticks with the slower buildup in the opening act and some distinct brogues throughout, Grabbers becomes 90 minutes of charming Irish horror. 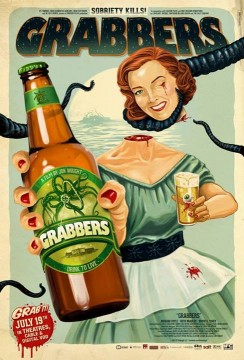 Keeping a small Irish town drunk is a interesting way to battle an invading horde of tentacle monsters. The reason: the monsters live on blood and water, but not alcohol. Garda (Irish police) officers O’Hara (Richard Coyle) and Lisa (Ruth Bradley) lead the attack to kill off the monsters and protect the townsfolk. They’re assisted by a an old town drunkard (Lalor Roddy) and Doctor Exposition (Russell Tovey). Eventually, the whole town is at stake and the solution the heroes devise lead to some wacky moments. Drunkenness becomes an organic reason, not a crutch, for characters to commit stupid mistakes. Unlike freaky tentacles stalking flesh, Grabbers doesn’t worm through its run time with gratuitous plot twists.

Grabbers has the chummy chemistry of Coyle and Bradley at the forefront. Both seem to like each other’s company. The special effects are well-done and believable. The monsters move fluidly, but what helps them the most is that they creep mostly at night. It’s obvious even before the final shot that our heroes have survived a major battle, but haven’t won the war.

While I wonder about the effectiveness of a sequel, I am amused by what’s presented to me. Grabbers succeeds as an amusing sort of horror. I didn’t get irritated or get the desire for the monsters to finish off everyone. I’ll raise a (non-alcoholic) drink to that.

Seen on Amazon Instant Video. Rent or Own Grabbers from Amazon.

Any purchases made after clicking the link help support Red-Headed Mule.