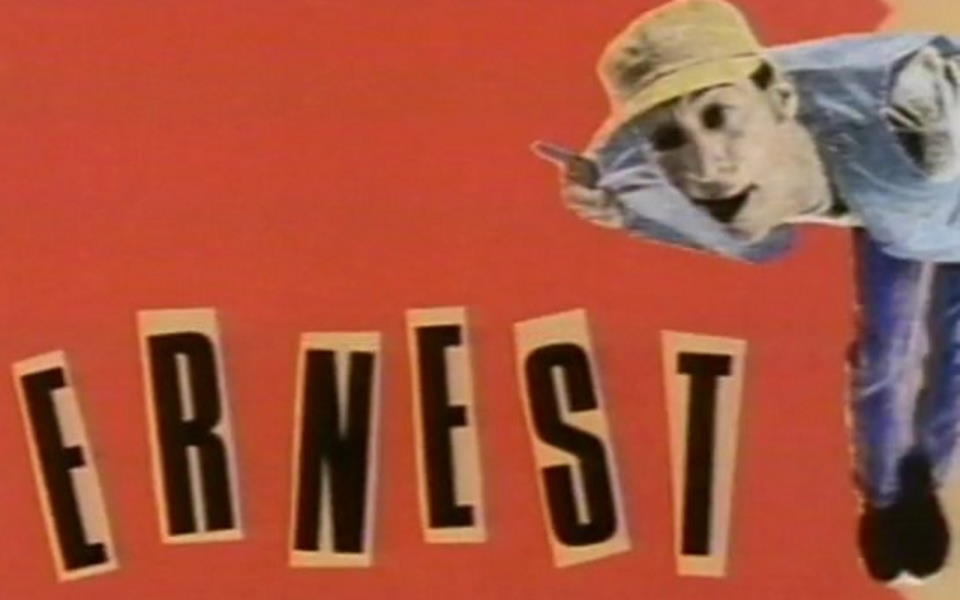 Ernest P. Worrell, the prolific pitch man shilling all sorts of products in the 1980s, is the result between John Cherry’s opportunism and Jim Varney’s rubber-faced charisma. Ernest became an advertising icon who moved into the star protagonist of seemingly a zillion movies. Being the idiot yokel gave struggling actor Varney a steady paycheck, fame, and fortune.

I have some nostalgia for Ernest’s antics — one of the first movies I saw on VHS was Ernest Goes to Jail. However, my now adult sense of humor can take idiotic attempts at hilarity in small doses. Let’s trace the creative evolution though a sample of horror-themed works.

Cherry makes his film directorial debut in the movie showcasing Varney’s comedic talents. Varney plays several characters including the preening Dr. Otto, an evil mad scientist having a third hand on top of his head. He designed the Gloom Beam to destroy the world’s financial systems and Auntie Nelda, a recurring character in Ernest movies.

The script is too childish to be mature and not totally kid-friendly as later Ernest works. Outside of Varney’s performance, the movie relies on thin character types: brave hero Lance Sterling (Myke R. Mueller), the hero’s thankless helper, Doris (Jackie Welch), the lovely-but-evil assistants, and half-hearted attempts at absurdism. Dr. Otto may have inspired by Monty Python, but it’s like the filmmakers have little understanding on how to make absurd humor work. Sterling is just the designated hero, a man who can’t be clever, charming, or photogenic by the filmmaker’s design. Not even Doris’ frustrated meta self-awareness doesn’t make their troubled journey more relatable.

Those looking for Ernest may be disappointed: in the original cut, he bookends the movie as he tells Vern he made a deal to acquire Dr. Otto’s changing coffin and appears at the end chatting with the heroes. The Amazon Prime Video version omits the pre-credits scene, but it actually makes the movie slightly better when [SPOILER ALERT] Ernest is shown to be another disguise of Dr. Otto.

Without Ernest’s intro, he’s merely an amusing cameo to cap off the weirdness of the movie. Also, Amazon Prime’s version of Dr. Otto is cropped to fit widescreen HDTVs. That effectively makes the gratuitous close-up shots more gratuitous. While it’s clear the movie has a budget (dig that synthy background music for Dr. Otto’s lair), the script seems cobbled from whatever inspiration Mel Brooks, Zucker-Abrahams-Zucker, the people behind Inspector Gadget could provide.

Dr. Otto and the Mean Bean Gloom Beam Machine whatever wasn’t a total success. It was critically panned and didn’t do boffo box office. With the helpful aid of home video sales, Cherry, Varney, and the rest would move on to do actual Ernest-centric movies. Ernest Goes to Camp did well in theaters, but Cherry had an eye on returning Ernest to television believing that America was ready for weekly half-hours of Varney-driven spectacle.

It’s 1988. Ernest and other advertising titans like the California Raisins and the Noid are part of popular culture. Ernest-mania was at a peak: there was one successful movie and the highest-grossing one where Christmas was saved was to come in November. Kids would soon get their own Ernest in their homes with a talking doll.

CBS had to get a piece of the Ernest empire by airing a Saturday morning show, Hey Vern, It’s Ernest. Each episode revolved around a theme where Varney and other John Cherry regulars act out skits appropriate to the theme. Hey Vern happened before the Educational/Informational mandates of the mid-90s so the show could retain its silliness while not forced to give a moral message.

Compared to the lame Dr. Otto movie, Saturday AM half-hour comedy was a better, maybe optimal, platform for Ernest P. Worrell & friends. but the show wasn’t a Pee-Wee’s Playhouse-like hit. Also, Hey Vern’s opening and bumpers having a 50s retro aesthetic isn’t as effective as Playhouse. On Pee-Wee’s show, the retro look pervaded through the set and attitudes of the characters. On Hey, Vern, it’s window dressing for quick-cuts such as this:

The horror-themed fourth Ernest movie might work better as a half-hour or hour long special on a channel like Nickelodeon. However, the movie stretches for amusement further than Jim Varney’s face. Asking ticket buyers to watch yet another session of Varney, along with a constantly confused-looking Eartha Kitt and others, to liven up a weak script may have been too much. The declining box office gross of Ernest Scared Stupid ($14 million compared to the previous three Ernest movies going over $23 million each) meant Ernest-mania was at an end. The bumbling hero being part of an eerie legend isn’t a bad idea, but Scared Stupid’s dumbness is overwhelming.

Ernest Scared Stupid has Ernest P. Worrell assisted of his canine buddy, Rimshot, Old Lady Hackmore (Kitt) and standard-issue 90s-movie plucky kids who just wanted bully-free fun. Their monstrous foe is Trantor, who was put underground in a burial presided by Ernest’s ancestor. Bumbling goof that he is, Ernest frees Trantor while endangering his kiddie friends setting up a new treehouse at the spooky site where Trantor’s buried.

While Trantor, later joined by his troll family, have a reign of terror capturing kids as wooden dolls, Ernest and the survivors figure out how to fight back. However, the adults, notified of the threat, stand in disbelief. Fear not as Ernest would discover and harness the power of MIAK (worse than Vitamin R-enriched Malk!).

Yes, miak. Ernest and Hackmore misread instructions on how to defeat Trantor and his ilk and soon after the Great Redneck Hope is wielding the bootleg milk-like substance. Soon after, the trolls’ real weakness — take a guess — is found to work. But after our heroes douse the lesser trolls to their end, Trantor himself must be defeated with… the power of unconditional love. Such love coming from the “Hey, Vern” guy.

Scared Stupid has the expected high usage of Jim Varney by volume. Young children and die-hard Ernest fans will, of course, enjoy this, but those outside the faithful will scratch/shake their heads a lot. Reacting with laughter at Ernest’s struggle in a garbage truck during the opening scene tests the viewer’s sense of humor. In one scene, the kids utilize their treehouse’s offensive capabilities (canned food cannon and pizza catapults) against the bullies. Another example: the trolls are on a rampage at Trantor’s burial site. Ernest finds a bowling ball then delivers bowling match commentary to the audience. He heaves the bowling ball which goes through a basketball hoop then lands on a man’s head. Monster doesn’t even get a scratch. Ha.

How about Jim Varney playing multiple characters? Even hard-hearted Ernest detractors can appreciate Varney slipping into various personas, right? Scared Stupid has two rapid-fire sequences where Ernest summons several alter-egos, including Auntie Nelda, a brownfaced Ottoman, an Australian hunter, and the vivacious Bunny. It’s baffling enough when he introduces his magical power to a kid, but it’s gets very weird when those alter egos are called into battle against the trolls. Is Ernest rapidly changing costumes? Can Ernest spawn separate entities at will? Don’t go dizzy thinking about it.

I appreciate Jim Varney’s gift of committing to making us laugh through his malleable body, but by the release of Scared Stupid, Ernest P. Worrell was stretching thin. One more theatrical release followed then Ernest would dwell in the land of direct-to-video.

The Importance of Being Ernest by Justin Lloyd