Rain, a former South Korean pop star and Stephen Colbert rival, is a hotshot pilot who can barely be tamed. Black Eagle has his last starring role before entering his mandatory military service. It’s okay popcorn entertainment marred by gratuitous melodrama and predictability. The movie, showcasing the aerial prowess of the ROK, sums up as “South Korea Saves The Day.”

It would be easy to compare Black Eagle to Top Gun. How much inspiration did Eagle take from Top Gun or its predecessor, 1964’s Red Scarf, I can’t say. Black Eagle appears to be an fusion of Hollywood and Korean movie styles. I did groan at a Michael Bay-style shot late in the movie.

WARNING: The next paragraph is spoilery. 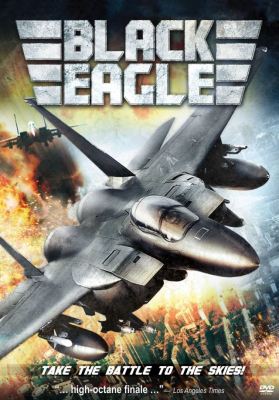 Rain starts as a daredevil in the Black Eagles and finishes as a military hero winning the heart of a young mechanic (Shin Se-kyung). That’s all clear by the first 10 minutes. The big threat comes from a North Korea ICBM aimed at the US. Only when two North Korean fighters intrude and terrorize Seoul, South Korea do our heroes spur into action. Why couldn’t North Korea keep the nuke a secret? Anyway, the whole point of Eagle is to make the South Korean proud to have awesome aerial might.

There are also some sappy subplots involving the other airmen and comedic indulgences, but they don’t matter once the great South Korean Air Force decide strike a blow to the bastards up north. By the way, America, shut up when the ROK handles their business.

The acting’s okay, but I didn’t get great chemistry between Rain and his love interest. The special effects are passable as long as the cuts are quick. To ask for a deep examination of relations between North and South Korea is asking for too much. Black Eagle wants to stir pride and makes us feel good, even it takes almost two hours to do so.