It’s a shame that Spider-Man is in Sony’s clutches. The Avengers, directed by Joss Whedon, is a very fun movie. Avengers is a good action-adventure focusing on our heroes forming a united front to protect Earth. Marvel Studio’s bold spectacle is an upper-tier superhero movie. The 3D effects are decent but are not needed to experience this movie. 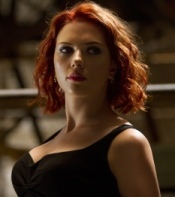 The big achievement of Avengers is how Whedon & company did the humor very well in the high stakes battle for Earth. I sense many critics will note the humor used in the movie. Joss Whedon, the filmmakers, and the actors did NOT consult Joel Schumacher’s campy franchise-killer playbook. The reverence for the iconic characters and the comedy relief is skillfully balanced. It’s intentionally funny with both dialogue and physical stuff done at the right time. Amazing!

The movie has little setup. At the start, villain Loki captures the Tesseract from S.H.I.E.L.D. Nick Fury then desperately pulls his trump card: assembling the best heroes he knows: Iron Man, Captain America, Bruce Banner (the Hulk), Black Widow. Loki bewitches franchise newcomer Clint Barton and Dr. Selvig for sinister aid. After Cap, Stark, and Black Widow battle Loki in Germany, Thor enters while Loki’s escorted to S.H.I.E.L.D. As our heroes are super-egos as much as superheroes, they fight each other for a while. Much BAM-POW action ensues while Loki and the Avengers tussle over the extremely powerful Tesseract. 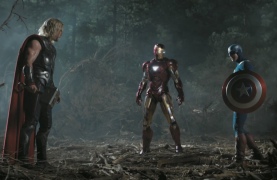 The characters show distinct personalities and attitudes. No one would confuse Iron Man with Bruce Banner when they’re one of the few pairs who initially get along. I’ll give credit to the actors, especially Mark Ruffalo’s calm portrayal of Dr. Banner and Downey, who maintains Tony Stark’s smugness. Even Chris Hemsworth gets the opportunity to loosen up the traditionally distant Thor. Chris Evans’ Cap values high integrity while having excellent posture. However, I was a bit disappointed at Samuel L. Jackson’s Nick Fury acting passive at some points of the movie. Jeremy Renner and Scarlett Johansson make a believable battle couple.

The Avengers is so entertaining that I wondered if there’s a need to see any more superhero movies. Only The Dark Knight Rises can challenge this movie for best superhero blockbuster. Okay, I still have interest in Rises and Amazing Spider-Man. Either movie would need a lot to convince me that each will exceed Avengers in fun factor. For fans of the Marvel Cinematic Universe and superheroes on the silver screen, the Avengers won’t disappoint. Hopefully the sequel will have a story and won’t be about hero insurance.

Do you agree with me? Do you feel the 3D is a must? What are the best lines of the movie? (I hope one of them is “He’s adopted.”) Please comment below.