There are three narratives in All In: The Poker Movie: poker being Americana, Chris Moneymaker’s 2003 World Series of Poker victory, and the effects of Black Friday, April 15, 2011, the end of three major online cardrooms’ access to the U.S. player pool. The documentary is somewhat persuasive in the first, has fair coverage of Moneymaker in the second, and doesn’t go far enough in the third. 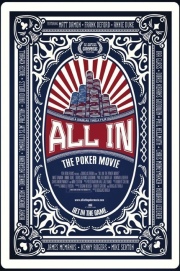 s the many famous faces of the movie have us to think, is the great all-American game. Poker grew out of its shady riverboat and Old West roots to become an activity that almost anyone can participate. All In covers the legends of World Series of Poker champions Amarillo Slim and Stu Ungar. Also discussed is the introduction of the hole cam, the essential part of making televised poker specatator-friendly.

American poker history is not complete without Chris Moneymaker, everyman winner of the 2003 World Series Main Event. While he isn’t very charismatic or known as a top-level poker player, I enjoyed Moneymaker describing his journey from almost not participating in the Main Event to becoming a superstar. The movie shows one of his famous poker hands: his rivering an Ace to make a better full house, queens full of aces (QQQAA), than poker great Phil Ivey’s nines full of queens (999QQ). I see two views from this: an up-and-coming power topples one of the best professionals in the world in a feel-good moment or a lucky donkey uses predictable betting patterns to make a groan-worthy suck-out. Moneymaker proceeds to defeat Sammy Farha heads-up to win the $2.5 million prize.

I did get some fun tidbits about Phil Hellmuth and Chris Moneymaker’s life experiences. Phil Laak has a laughable explanation of poker growth. While there are comments from Chris Ferguson, Howard Lederer, and Annie Duke, All In does not portray them as villains. Neither do we get any comments from them about Black Friday and the Full Tilt ponzi scheme allegations. Viewers hungering for these infamous players to be chastised and humiliated will be left starving.

All In covers the poker boom of the last decade. That boom is really a bubble. There was some inflation in the era of Slim and Doyle Brunson. The bubble was at its largest from 2003-2006 lifting poker’s profile to the mainstream. The passage of UIGEA deflated the bubble leaving it on lower ground with fewer online cardrooms for U.S. players to play. Finally, the bubble burst with the indictments and domain seizures on Black Friday. The movie captures the players’ reactions of frustration and collects the pros and cons of the battle to have fully legal online poker in the States.

All In disappoints as an investigative piece, but presents the point well that poker is a populist pursuit. I’m not sure whether the story of Chris Moneymaker can still draw big audiences in 2012, but I did like hearing Moneymaker’s thoughts on his momentous journey. All In is most worthwhile for casual poker observers. Available online.