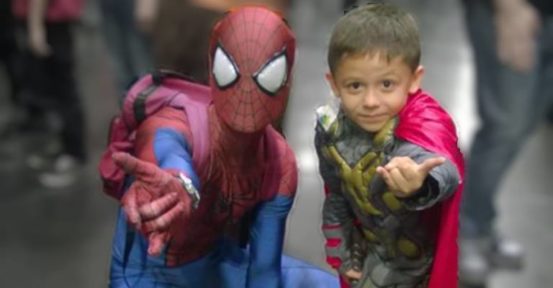 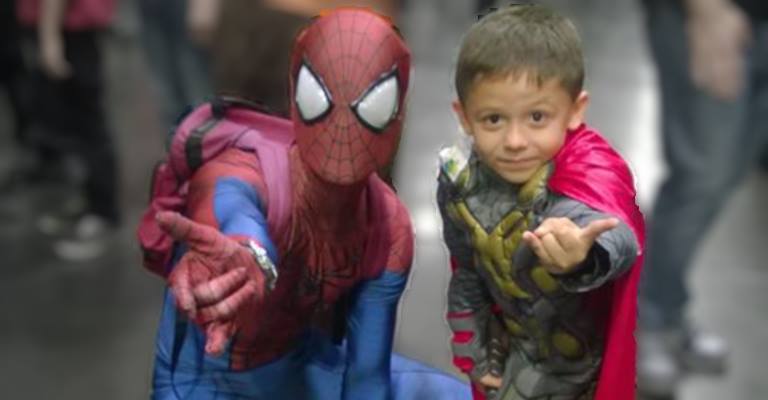 Where Paolo Rivera does dazzling doodling, Roshawn acquires awesome action figures made by NECA, and the kids have fun with cosplayers. Read Part One!

It was day two! We were running a little late but we figured we would be…we have kids. Not to mention that my son was dressing up in his Thor: The Dark World costume!

Needless to say, we showed up to a very crowded Sacramento Convention Center. LUCKILY my wife paid attention to the Wizard World site and used their “Preferred Parking” options. We paid for parking all up front for the whole weekend and just walked up to the Convention Center. We just needed to get the kids’ stickers and then we were in again!

Today was going to be a little different. I was going to pick up my commissioned painting from Paolo Rivera! I was ecstatic! I was also picking up a friend’s piece as well. Since I knew I would be seeing him that morning, I also brought in my Magneto number one. I was going to get it signed.

Before we would stop by his booth though, we decided we would try our hand at some of the shops. I was jonesing to spend some money! I had my eye on the NECA Man Of Steel, Thor and Pacific Rim figure. They were so massive and detailed that I just HAD to have them. That was easier said than done though. People thought my son was one of the coolest people ever. We were getting stopped and people were taking pictures. My son just lapped it up. He was all for it.

And when we stopped by Cosplayers Alley, we knew it was about to hit the next level. My son is a HUGE Thor fan. When he saw Ryan Frye, he almost exploded. Ryan Frye, who is best known for his Thor cosplay, was in his Assassin’s Creed costume for the day. My son didn’t even know what that was. He looked at Ryan and immediately thought he was the real Thor! He pulled on my shoulder, yanking me down, and yelled “IT’S THOR!” Of course, we had to get a picture then Ryan Frye was especially cool with taking a picture.

He pretty much made my son’s day by doing that. He would NOT stop talking about how he had met Ryan the rest of the day.

After that, we walked over to one of the shops selling all three of the figures I wanted. I ended up walking away with one out of three. Not a bad haul! The NECA Thor figure was mine! And since it was huge…we’d have to make a trip back to the car. I wasn’t at all upset that we had to go back already. I was happy that I was able to get them! We stayed at the car for a few minutes before we headed back to the convention. The kids were having a great time. 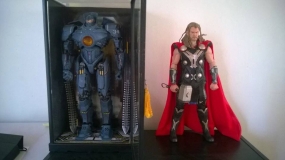 We finally decided to return to the convention center after a few minutes of chilling at the car. Upon arriving the second time, we headed straight for Artist Alley to pick up my commissioned piece. I was freaking out with excitement! Every step was a step closer to getting my new art!

We finally hit the corner and there was Mr. Paolo Rivera’s table. I was getting happier and happier by the second. He looked up and saw me. We greeted each other and he pulled out my Chris Pratt Star-Lord commission.

OMG!!! It’s beautiful! I mean, it is AMAZING! I could not express my gratitude enough. He even handed me my buddy’s piece, which was equally amazing! My buddy ended up getting a Wolverine commission based on the cover to the first Wolverine solos series.

And, if I didn’t think it could get any cooler, he said that he would be able to do my other commission as well! I was going to get my Marvel Man too! I asked if he could sign my Magneto issue, to which he explained that he had not even seen it yet. YAY! I got the first signature on the new issue! The weekend was getting better by the second!

I knew we still had a few hours left in the day so I just wanted to take the family around and walk for a bit. I should’ve known better though. We walked by the shop that had the NECA Pacific Rim figure. I did it. I bought it! My day was complete! Since I made that last purchase, it was pretty much decided that we should go home at that point.