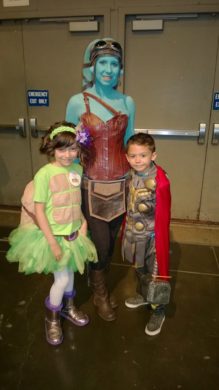 DAY THREE WAS NIGH!! It was day three and we were ready for it! My son was dressed in his Thor costume but with a little tweak. I decided he should be in Asgardian Light Armor, since it was hot the day before, and got rid of the arm armor. He looked pretty wicked. My daughter saw that my son had a lot of fun dressing up and she wanted in on the action. That’s why she went as her favorite Ninja Turtle, Donatello!

We were walking past a few bar patrons when my kids started getting that confidence that kids get when they are wearing a Halloween costume. “Cool costume!” and “She’s so cute!” were being shouted from the people in the bars. My son held up his hammer and smiled. My daughter shied away from the attention. We had finally hit the corner to the Sacramento Convention Center. Being there the previous days, we knew we had to go get the kids’ stickers first.

After doing that, we decided to take some pics at the Wizard World backdrop before the crowd came. What came next was unexpected to say the least… The floor was packed. I mean worse than sardines. From what the website said, Sunday was almost sold out but Saturday and Friday were sold out. Based on this, I thought those days would have been more packed. That was not the case.

I grabbed my kids’ hands tighter and we started through the crowd. They took a few pictures with more cosplayers and even a few attendees. The kids were stoked. We eventually made it back to Ryan Frye who, today, would cosplay as Marvel’s Thor! We hit the corner and my son blew up. It was Thor! Once again, Ryan Frye had made my sons’ day. He took a picture with my son and it was glorious. Both held there hammers up and the smile on my sons’ face was priceless. He was so excited and it would carry on for the whole day.

From there we would make our way through all of the booths and back through Artist Alley again. Today was the day we would go to the Greg Horn booth. I was excited! I had always admired his work and had always wanted a few prints to hang up. Now was my moment. We waited in line in front of Greg Horns’ booth. He had so much amazing art that it was hard to find just one.

But then I saw three that I had narrowed it down to:

I had just one person in front of me. A gentleman saw that I had a VIP badge and handed me my Greg Horn VIP litho. It was titled ‘Girl on Fire’ and no, it had nothing to do with ‘The Hunger Games’. It was just a random lady on fire.

Any who, Greg Horn then game up to me and started to talk to me! I was in shock! I had no idea what to say. He was asking me about his art and if I liked it. Of course I did! How could I not? I told him how I had wanted those three prints and he even told me that he’d give me a deal because I was a VIP. Usually the prints were $20 each. But I could get the first for $20 and $10 a piece for each one after that. Okay! That made it $30 for my Doctor Who set!

I then asked if I could grab the Captain America poster as well. To my dismay, the lady in front of me had bought the last one. But everything turned out alright as Greg Horn signed my prints for me. I couldn’t be too upset. I had just got these amazing prints AND had the pleasure of meeting Greg Horn! The day couldn’t get any better, or so I thought.

After leaving Greg Horns’ booth, we headed over to the celebrities. So many people were there, almost too many to make it through. I tried to get my family over to where Chris Hemsworth was, but we were not able to get through the sea of people. We were at least 70 feet away before security told us to turn back. That was okay though. We had already had a lot of fun and seeing one person wasn’t going to make or break our day.

My son and I turned around to go sit down with my wife and daughter, who were now at the far wall of the convention. When we finally saw them, I had ended up bumping a security guard. I apologized and looked up. Bruce Campbell was behind him! He smiled and looked down at my son. “Thor! We’re all saved!” I was star struck. There was no other word for it. My wife saw it happening and even she was excited. My son just smiled and raised his hammer. It was an awesome feeling.

The day was almost over. We had walked so much and got to see so many people. My kids were exited to just be there. Since we had done everything we had wanted to do, I thought we could just make a few more rounds and then head out for the day. So that’s what we did. We headed through the shops and checked out a couple of toys.

I took my son into one corner store and was checking out a few minimates when I bumped into another gentleman. I quickly turned and said “Sorry.” He looked up at me and smiled, “It’s alright man.” It was Michael Rosenbaum! Immediately I stuttered, “Oh my gosh! You’re you! I’m sorry sir!” He just smiled again and patted me on the shoulder. My wife asked who the guy I was talking to was. I managed to tell her it was Michael Rosenbaum by explaining he was Smallville’s Lex Luthor. To which she told me how a group of cosplayers had just learned he had photobombed their group pic. I looked down the aisle to see them frantically searching for him. It was hilarious!

Apparently, right before he walked into the toy corner store, he had stood behind them making a face and waving his hands. I wish I had seen their faces when they figured it out. With that happening, we decided to take one more trip through Artist Alley. There was still one more person I had yet to meet: Chris Claremont. 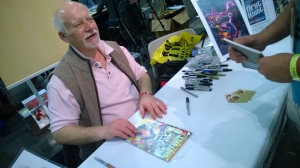 The man was a legend and I’ve always wanted to thank him for some of the best story arcs of all time. ‘The Dark Phoenix Saga’, ‘Days of Future Past’, ’Inferno’ and countless others. He was one of the reasons that the X-Men flourished back in the 90’s. His writing was essential to their comeback.

The main reason I wanted to meet him though, was to talk about Star-Lord. Back in the 80’s, he had a hand in writing Marvel Comics ‘Star-Lord’ special edition. I had been a long-time fan of Star-Lord (BEFORE ‘Annihilation’ and back in the days when Jim Valentino had illustration and writing duties). I don’t know why but space characters had always fascinated me. I wanted to ask him what he thought about the new movie coming out.

So, we got into his line. It was pretty long but worth the wait. I was finally face to face with him. He looked up at me and smiled. I don’t know what it was about him but his smile made him seem humble with his celebrity status. I had greeted him and introduced myself, to which he did the same. It was a funny moment. I then asked if he could sign my book. I pulled it out of my bag and his eyes lit up. His smile broadened and he shared a little bit of excitement.

“Oh wow! Star-Lord! You know, I’m really disappointed that I haven’t seen anything about Ship in the movie.”

I was smiling again. Ship was one of my favorite parts about the Star-Lord character. The interaction between Ship and Star-Lord was something you always expected back in the old books. With the re-emergence of Peter Quill in the ‘Annihilation’ storyline, Ship was left out. Sure the ‘Annihilation’ books were great, but Ship was sorely missed.

I then said the only thing I could think of saying to him. “Right?! I think Ship was essential to the Star-Lord mythos.” He just smiled and agreed. He then signed my book. I was overjoyed. We could now leave the convention and I could walk away feeling like I had accomplished everything I needed to. The best part was that everyone felt the same way and that we all enjoyed the time we had at Wizard World Sacramento.

Reports by Roshawn, edited by Clarence