Wizard World Sacramento! Three days of what was promised to be a pop-culture explosion for nerds everywhere. Special guests included cast members from, The Boondock Saints, The Walking Dead, Sheamus from WWE, William Shatner (THE SHAT!), Stan “The Man” Lee, Bruce Campbell (GROOVY!) and, from Marvel’s The Avengers, Chris Hemsworth!

And let’s not forget about the comic book legends as well with talents such as Neal Adams, Tom Cook, Dan Brereton, Paolo Rivera, Chris Claremont, Greg Horn, Ethan Van Sciver, Jimmie Robinson and more!! This was going to be one awesome weekend!

First off, let me say I was there as a fan this time around. I ended up having to get 3 day VIP tickets at the last minute because something was insinuated and I, apparently, took it the wrong way. So, needless to say at this point, I was there as a fan. I was still SUPER excited though! I hadn’t been to a Wizard World in years!

It started off with me and my family walking from the recommended parking. It was less than half a mile away from the convention center and it was only $5. That’s $25 cheaper than what I would pay at Wonder Con in San Francisco to be that close. For that, I will forever be grateful to the city of Sacramento. That was a HUGE load off of my mind.

We ended up getting to the convention center within minutes and were welcomed by the nicest event staff in recent memory. They showed us where to go in order to get our tickets; they gave us free stuff and then escorted us to the line. We had made it to the end of the line…a LOOOOOOOOOOONG line.

We didn’t have to wait too long before we were greeted by James Hong! He walked to the top of a tiny hill in the middle of the crowd and screamed “WIZARD WORLD!! It is going to be alright! LO-PAN IS HERE!!” The crowd erupted in cheers. He then made his way through the crowd and to the back of the building. The family and I were getting pumped!

A few minutes later, were walking inside to the convention! We started making our way up the aisles and checking out the crazy deals on toys, comics and almost anything pop culture you could think of. There were a ton of great things on sale! People were selling imported toys for discounted rates, variant covers for half off and even cult classics you can only find at cons, like Roger Corman’s The Fantastic Four! It was beginning to look wonderful indeed.

First things first, we went to stand in line at the “VIP” booths to get our swag. We were given a Wizard World Sacramento variant to Wolverine issue one but were also given a badge to receive lithographs from several artists to include Michael Golden, Ethan Van Sciver, Greg Horn, and Arthur Suydam.

Some of these lines were crazy ridiculous. I had been to a few of the Wizard Worlds before and they were never this bad. Lines were everywhere but there wasn’t a line for VIP. Maybe I am asking for a little too much but, when you pay $200 for a “VIP” ticket, you tend to think you’ll get put in a VIP line in order to get your swag. That wasn’t the case.

Because of that, we ended up having to wait until the last day to get our lithographs from Greg Horn. His line had wrapped around the second aisle by the time we got in. All this meant was that we could peruse the rest of the convention though so I wasn’t too upset about it.

As my family and I started walking through the crowds, we were forced to check out EVERY booth. I say forced because the convention had its own current. Once you got into the mix, you had to follow the current. There were no ifs, ands or buts about it. You were going that way because everyone was going that way. As I write this, I have started thinking ahead of myself and I would like to apologize for those that feel this is a moan and groan fest. With that in mind, I will continue.

We finally made our way back to artist alley, roughly two hours later, and I really wanted to check out Paolo Rivera’s (works a lot with Marvel and is an all-around nice guy – www.paolorivera.blogspot.com/) and Jimmie Robinson’s (one of the nicest creators I have ever met – www.imagecomics.com/creators/view/jimmie-robinson) booth. It didn’t take long for us to get there and he had a really nice setup.

There was one banner and two portfolios along with his materials. Honestly, it was one of the most modest setups I had seen at a convention and it was all that much better for it. It wasn’t all gaudy like a lot of the other tables. Needless to say, his art was able to be seen and appreciated even more because of this.

Walking up, I was getting a little nervous. I had contacted him the week prior for a commission and he said he still had room. I was pushing my luck when I asked if he could do two, one of them being a half body shot of Star-Lord (Chris Pratt version) and the other being a Marvel Man. I was super excited to see them when he was done.

I managed to introduce myself and, pleasantly, he showed me that he was currently working on my Star-Lord! He said that if he had time, he would also do my Miracle Man. I was ecstatic! I could now look through the program and find Jimmie Robinson’s table! Standing by Mr. Rivera’s table for a few minutes, while looking through the program, was actually not that bad. It seemed like the crowd had died down a bit and even my kids were able to get a breather. However, it wasn’t too long before I looked up and saw that his booth was right across the alley. I was about to meet Jimmie Robinson! 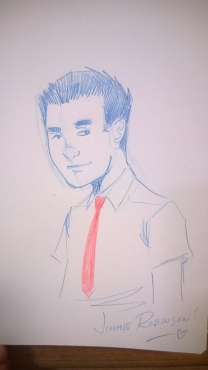 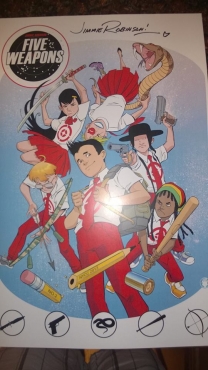 Even though I had not read Bomb Queen, I had two copies of every issue for Five Weapons. I am loving that series. So we hit the corner and wound up in front of his table. Once again, I introduced myself and exclaimed my fanboy-ness to him. He was appreciative and was more than happy to sign all of my copies. I even bought an 11×17 lithograph from him as well. It was more than worth it.

Before walking away, he even gave me a gun club ruler! And a sketch! He drew me a sketch of Enrique! This was only the first day and I was more pumped than before now! I could now go home for the day and be happy.