Here’s my review, with additional thoughts, of the multiplatform video game, Valiant Hearts: The Great War. While I aim to keep my bite-size review in 110 characters or less, I missed by two characters. On the other hand, the triumphs and tragedies that occurred during World War I should not be forgotten.

In Valiant Hearts, Ubisoft used their Ubi Art graphics engine not for fantastical adventures of limbless people or RPG heroines, but to make a story about the personal trials of World War I accessible. It’s the intertwined story of three people, a German-born man conscripted away from his French family, his father-in-law fighting for the Allies, and a American (African-American?) volunteer fighting with the French.

Men are top-heavy and the battlegrounds have muted colors. While the art is designed for gamers not familiar with the Great War, there’s a subtle maturity in that all of the figures act realistically. 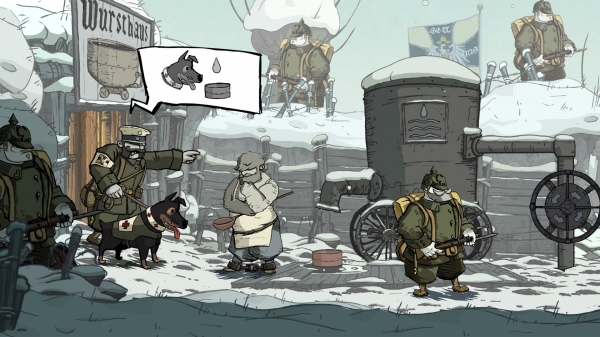 Hearts is described as an “action puzzler,” but it’s really more of a find-this-to-do-that puzzle game with occasional action-oriented sequences. For example, one player-character shovels dirt with a ladle which can help avoid explosives, a nurse heals injuries via quick-time events and the canine companion, named Walt, lends a helping paw turning levers.

While not mind-blowing, the action stuff, including tossing grenades at the bosses’ weak points is cool to do.

It’s never too frustrating to solve puzzles as the hints system is there (Xbox 360 controller: Back button) when the player gets stuck. For each level, up to three hints are provided one at a time with each getting more progressively more detailed. I’m a proud, but middling, gamer who relishes the thought of never needin’ no stinkin’ hints, but I had to use up all three hints a few times. In one case, I had to aim a mortar at a specific spot, but I had trouble understanding where the icon-based hints are trying to say.

Any deaths or game-ending failures result in the player returning to the last checkpoint. Sometimes there are long checkpoints, but there I never felt like ragequitting. 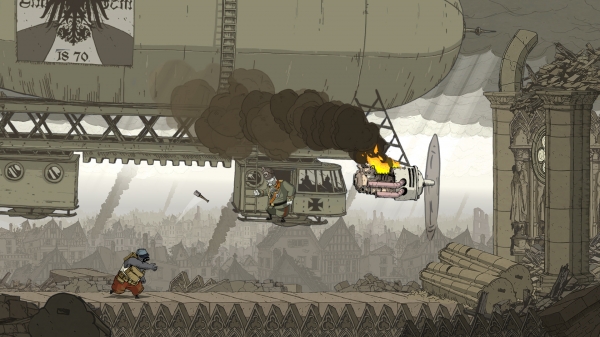 I overcame that, and also beat the game. Afterwards, I had a brief reflection of the state of war technology from WWI to the present. World War I tanks and aerial warfare; today, there are drones sent to vanquish terrorism, or what the U.S. perceives as threats. I sense that the developers at Ubisoft Montpellier may be a bit anti-war, but they don’t shy away from the struggles of the early 20th century’s major worldwide conflict.

For that, Valiant Hearts is a solid game about world history that few games explore deeply.

Screenshots come from the Steam store page for Valiant Hearts.