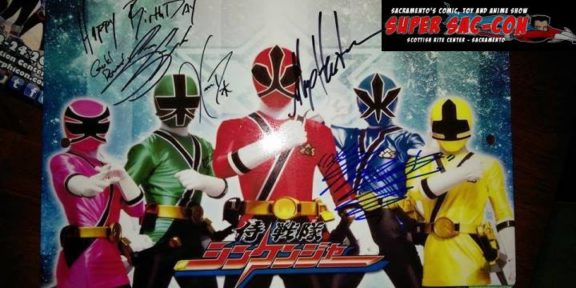 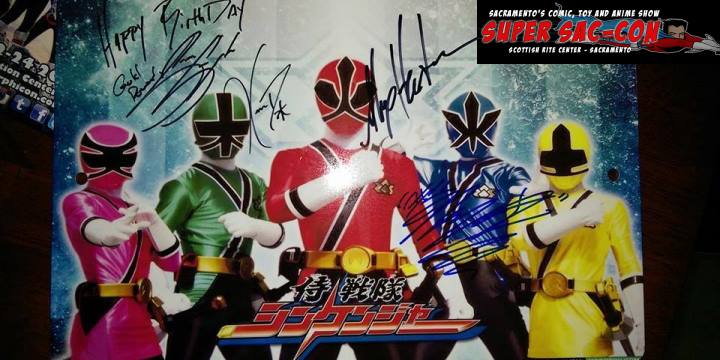 Seeing the talent that they had lined up for the show, it was hard to think about doing anything else this weekend. I saw the Power Rangers Samurai cast (Alex Heartman, Najee De-Tiege, Steven Skyler and Hector David Jr.), Kevin Maguire (Justice League America and Guardians of the Galaxy), actor D.C. Douglas (Albert Wesker from Resident Evil video game series, Mass Effect character Legion) and many more! 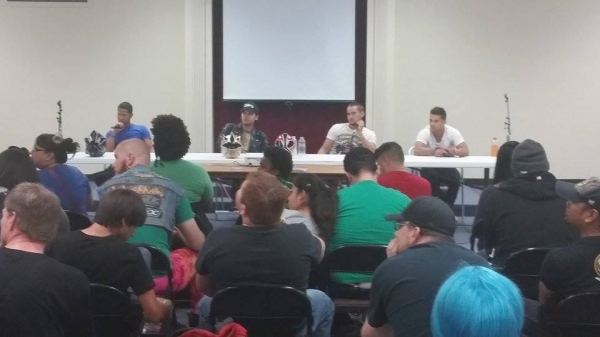 The day started with a Power Rangers Samurai Q & A. It was exciting. These guys really know how to put on a show for the kids. They were very respectful to everyone and even gave some insight on how the show is created.

Apparently, they don’t even get to see their episodes ahead of time. They get to watch it with the rest of the world. I think that brings a real sense of excitement when you are watching it with the fans. And seeing the way these guys interacted when asked about behind the scenes moments is priceless. You can tell they are friends even off the stage.

After the Q & A, the Rangers went out onto the floor to meet and greet fans. While walking the hallway, I could see Najee De-Tiege greeting fans and stopping to take pictures with them. At one point he even took video of these kids that were dressed as the Blue and Green Samurai Rangers. Continuing down the hall, I started checking out the carious shops at the convention. There was more than enough merchandise to fulfill any fans dream.

The assembly center was packed with fans and exhibitors all sharing their love for pop-culture. From the new DC Direct Arrow figures to the latest Sword Art Online chibi plushes, there was something for everyone.

Among these shops, one stood out. Adam’s Comics and Collectibles, which featured a vast array of all things awesome. There online shop is definitely something you want to take a look at. There were toys and comics that I had never seen before but was completely mesmerized by. And the prices were crazy god. Even for a con, nothing was marked up.

Among the exhibitors were a very impressive amount of cosplayers. I witnessed two Heisenbergs (both doling out blue rock crystals), a Chun-Li, a Mighty Morphin Red Ranger, a Titan from Attack on Titan, a Mafia Wars character, a Jeff Hardy Willow and even a Power Rangers Dino Charge costume. All were of extremely well-built craftsmanship and would do their fandoms proud. I have to admit, they certainly left me with an itch I feel I need to scratch…

In other sections of the convention, there were even more pop-gods that had graced the floors. Kevin Maguire, creator of one of the most iconic comic covers of all time, was in attendance! The often-imitated, but never-done-justice (yeup, I just did that), cover to Justice League #1. But let’s not roll all of his work up into one cover. He has done so much to get comics where they are today and it was just amazing that he would come by. I really hope they can get him to come out again.

Back to the Power Rangers Samurai cast for a minute. They did an amazing job keeping fans entertained as well as creating new ones with their personalities. Everyone that stood in line had a personal experience and I can truthfully say that all were positive.

I witnessed a group of fans take pictures with the Rangers and even overheard them joking with fans. The biggest surprise came when I asked if they could sign “Happy Birthday” on a metal Power Rangers Samurai lithograph for my son. My son was dressed in a Power Rangers Megaforce Red Ranger costume and he, along with his sister, is a HUGE fan. Alex Heartman looked at my son and excitedly asked him “Is it your birthday?!” To which my son said “Yes, sir.” 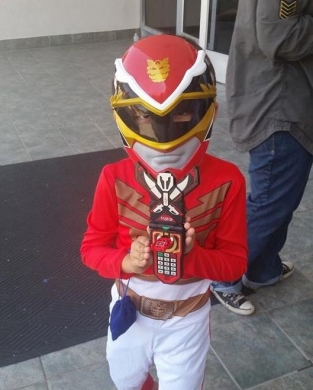 At that point, all the Rangers (and even the people in line) started singing Happy Birthday to my son. His eyes lit up! It was, by far, the best thing that has ever happened to him. He screamed “Thank you!” and has been on cloud nine ever since. And, to make it even more special, my son got to talk to each Ranger individually. For that, I would like to give a HUGE, and well deserved, THANK YOU to the entire Ranger family.

The fact that these wholesome family-oriented folks have kept kids coming back for the past 20 years and still make time to make each individual feel special is a feat that I have never seen before. That day, I became a fan again. I am so glad to be able to share something like this with my children.

There was still more talent waiting on the floor including Sarah René Straub (Birdland and Blind Follies), Scattered Comics (Shadow Hunters and Sworn), and ECV Press (Union St. Choir and Trixie Dynamite). The talent that was at the convention was well worth drive. All of the artists brought a special piece of them to the convention and left with a piece of every goer’s heart.

It’s rare to see a convention so personal these days. And, even with pop culture becoming bigger and bigger each day, Sac-Con has definitely pulled it off.