It was the last day of Sac Anime and I really wanted to take my kids to see the Power Rangers. I went as a fan and not a member of the press but I still had a lot of access to the special guests as the convention was small enough that it was not overwhelming for them.

We started our day off by picking up our tickets at the Sheraton hotel. The tickets were $20 per adult and children eight and under were free. The event staff was very nice and even helped me sign up for the next convention right there on the spot. From there we made our way up the street to the Sacramento Convention Center. We were lucky enough to bump into a few cosplayers on the way and were even luckier to have taken pictures with our kids.

The first cosplayer we met was dressed as Psy from his ‘Gangnam Style’ video. He was so convincing that my son actually thought it was him. After that, we were lucky enough to take pictures with Edward Scissorhands (AMAZING costume), Teen Titans animated Beast Boy and Raven, Batman, a TARDIS with the Tenth Doctor, a giant Predator and even two cosplayers dressed as the Tenth and Eleventh Doctors from ‘Doctor Who’. My son was ECSTATIC!! 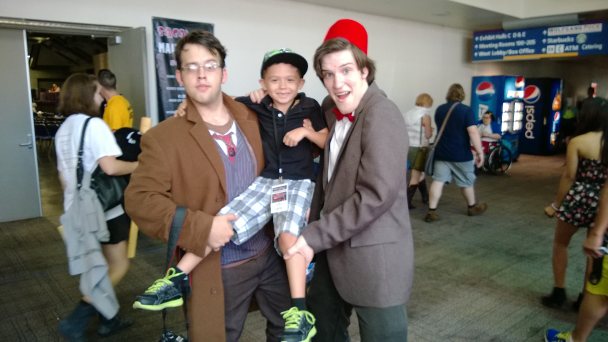 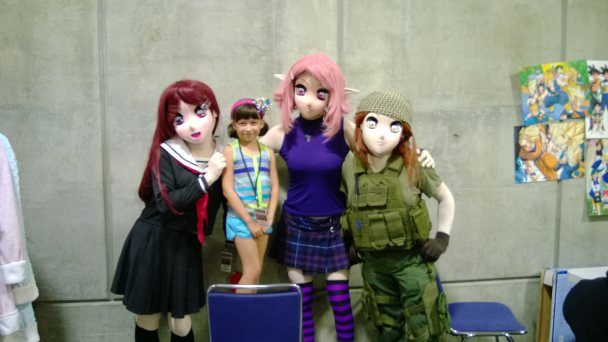 My kids thought it was a regular convention and had no idea that we were there for something else entirely, but their love for cosplayers knows no bounds so it was an added gift. We made our way up to the third floor for the Power Ranger Samurai Panel. I was getting excited in anticipation of my kids’ reactions.

We walked in and made our way to the front row. After we sat down, I told my son to look up and see who was talking. The look on his face was priceless!! “Daddy!”, as he violently shook my arm, “Those are the Power Rangers! “. He was going crazy. My daughter just smiled and sat there but my son was going bonkers.

For instance, he asked about the picture going around the internet with Mike (Hector David Jr.), The Samurai Green Ranger, and Tommy (Jason David Frank), the Green Ranger from Mighty Morphin Power Rangers. There is a picture that shows Mike and Tommy together and Mike has the power shield on. I can’t go into details about it but, it is pretty awesome. After that, something AMAZING happened.

My son got up to ask a question. They were passing the mic around and Najee De-Tiege (Kevin, the Blue Samurai Ranger) saw my son raising his hand. He asked that they give the mic to my son and AWESOMENESS ensued. Check out the video for my sons question and the reaction!

After my son asked his question, the panel was pretty much over. As a final farewell from the panel, everyone huddled up and said “Rangers Together, Samurai Forever!” It was a really cool moment for my kids which made it extremely special to me. At that point we all started to disperse when we saw Najee De-Tiege pulling something out of a bag.

It was a Ranger card.

My son wanted one so we walked over and he gave us one. It was a way to keep in touch with the Power Rangers by following them on Twitter, Facebook, Instagram and any other social networking site they may be a part of. THAT is how far we have come in the form of actors and actresses trying to stay in touch with fans. I still think that was a really cool idea of them to do.

From there we headed out of the panel hall and back down stairs. My kids had no idea, but it was about to get even crazier for them. We headed down to the main exhibit hall where we started to walk around and view the local artists. There was PLENTY of talent down there. There were people who specialized in one-sheets, comics, gamin accessories and even calligraphy. It was a pretty great Artist Alley. One such amazing artist was JG Morales Villanueva. He was kind enough to give my kids some numbered lithographs. If you have a second, please check out JG’s website. You can tell his book will be awesome as it is a labor of love and not a job to him. 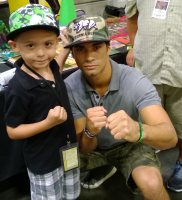 We walked over and we talked to the respective actors. Najee was very nice and we ended up getting a very cool animated lithograph from him, which we then got all the Rangers to sign. Alex was the second to sign it and then came Hector. Hector made my sons day. We asked if he wouldn’t mind taking a picture with him and he immediately obliged. He came from around the table and got in an action stance that my son then tried to mimic. He was extremely nice to my kids and even did some animated poses with them. 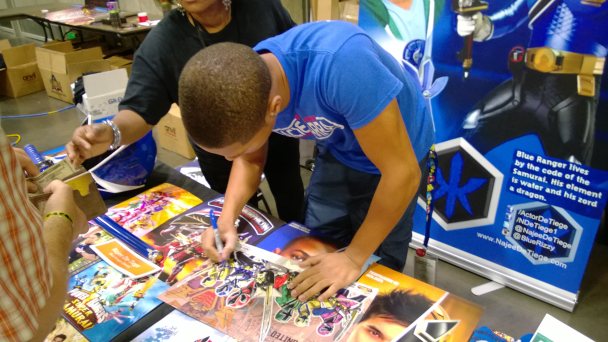 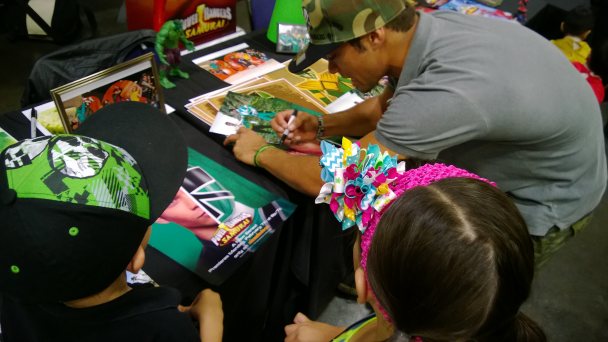 One such photo was with my son where he did a hand stand while my son tried to as well. The simple fact that these people were nice enough to my kids that they didn’t walk away feeling sad made my life as a parent really easy. And they certainly put that old “You should never meet your heroes” saying to rest.

We left that day with a bunch of pictures and a ton of memories. I don’t think we will ever forget this day. My son keeps talking about how he’s going to be a Ranger when he grows up. And for that, I will definitely say this was one of the best cons I have been to.