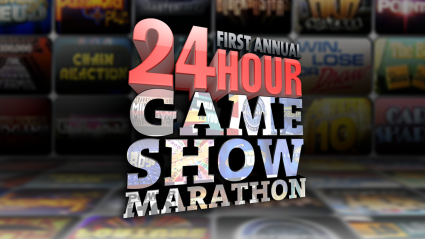 Making entertaining shows for 30 or 60 minutes is hard work. The First Annual 24 Hour Game Show Marathon is a huge effort of streaming 24 game shows of various types. I give a lot of credit to hosts Christian Carrion, Cory Antonado, and Bob Hagh for preparing this big event.

The marathon is to support the fight against cancer. Donations are currently accepted. Donors who give $25 will be able to play. This event will start at 3 PM Eastern Time Friday and will be streamed at wsinradio.org & ustream.tv with the keyword WSINRadio. For those readers or passersby of RHM the stream will be posted on the home page.

Here is the interview with Christian & Cory:

RHM: How did you & the others decide that not only will you do a live game show, but it will be a 24-hour marathon?

CHRISTIAN: The three of us are huge game show junkies. I was on Facebook one day, and Cory sends me this Youtube video called “24 Hour Panel People“. It was a promo for this project a comedian in England named David Walliams had put together to raise money for a charity over there. He got a few other comedians together, and they all re-enacted 24 British quiz shows, one per hour, for 24 hours, all on live TV in front of an actual audience. So Cory sends me this, and he says, “This reminds me of something you would do.” And he was right — I’ve always been fascinated with experimental broadcasting, endurance, that kind of thing. So I thought about it and figured I knew enough people that we could do it at the station, pick 24 game shows to play, and have it come out really awesome. Also, we were lucky that Relay For Life was coming up, and that the American Cancer Society is such a wonderful charity to play on behalf of. So I talked to Colleges Against Cancer, they fell in love with it, and the Marathon was born.

RHM: What was the longest live broadcast or stream you’ve ever done?

CORY: I’ve done two live radio marathons for my college radio station, WEXP in Philadelphia, PA. I made it through about 20 hours before I puked in a stairwell and passed out. (Both times, I’m fairly sure.) This time, since it’s for charity, I’ll probably be more wont to not overindulge in food and stimulants. That, or lots of Pepto Bismol.

CHRISTIAN: Two hours, at most. This is completely uncharted territory for me.

RHM: Will the Marathon have live video? Press Your Luck and Concentration would be hard to imagine as audio-only.

CORY: Christian can speak more to this, but I know we’re planning on doing a live stream of video on my website, PacdudeGames.com, and on UStream.tv by typing in keyword WSINRadio.

CHRISTIAN: Yeah, there’s going to be a continuous stream of the entire 24 hours on UStream.tv. All you have to do is search for “WSIN Radio”, and our page should come up. Cory’s also going to have a video stream set up on his site, too.

RHM: Was it difficult to decide what games will make it on the roster?

CORY: Extremely. I think we started with a list of around 40 or so, and it was tough to balance between popular and game show fan favorites, lots of players and one or two players, and shows that we’re personally fans of and shows that we don’t like. I’m very happy with our lineup because I think we’ve struck a great balance of shows that people recognize, that people maybe don’t recognize, and that people will enjoy listening to and watching.

CHRISTIAN: A lot of thought and calculation went into the list of games we’re going to play. We tried to include some games everyone knows — you got your Wheel Of Fortune, your Jeopardy, your Millionaire. But I think each of us also had an idea of what the hardcore game show fans would have wanted on the list. Also, since we are game show fans, there were a few “dream” game shows we wanted to include. I pushed hard to include The Big Showdown and You Don’t Say in the list. Cory included a lot of British panel games. The list, as it is, is very multi-disciplinary — we have equal parts trivia, word games, spelling, numbers, drawing, and just plain improvisation. I think the audience is going to have a lot of fun listening, watching, and learning to play games they may have never heard of before, as well as the ones they grew up with.

CORY: Originally, we had the UK panel show Would I Lie to You on our list, but that was changed to Mock the Week to make it easier to prepare. I think someone was also tossing around the idea of the Million Pound Drop Live, but we couldn’t secure the £1,000,000 in time.

CHRISTIAN: There were some games that I wanted to put in, but figured afterwards that their purpose was already being served by another game. The Joker’s Wild, for instance. I wanted to put it in, but we had so many quiz games in the lineup already, I didn’t particularly think we would be gaining anything from including what’s basically a bare-bones quiz with one large piece of eye candy.

[See a gallery of what they DID include or view the list below the interview.]

RHM: I’m assuming that you, Chrisitian, and Bob will rotate emcee duties through the day. Is this correct?

CORY: Yep, we’re balancing out so that for the most part, you get a new host on a new show every hour. A funny coincidence to note: Each of us is hosting games that we appeared on. I’ll be hosting Wheel of Fortune, Christian will be hosting Who Wants to be a Millionaire and Bob will be hosting Chain Reaction. I think that every game we host fits our personalities and hosting styles pretty well.

CHRISTIAN: This wasn’t on purpose, but the way the list is set up, Cory is hosting the British games, I’m hosting the classic old-school games, and Bob is hosting lots of the crowd-pleasers.

RHM: How do you plan to keep your energy level up?

CORY: We’ll have plenty of coffee and energy drinks to keep us up. We’ll also have some fresh blood in terms of new players playing our games that will hopefully transfer their energy to us.

CHRISTIAN: I think perhaps I’m not as concerned about keeping my energy level up as I should be. I’m pretty confident that the natural excitement we’re going to be generating with these games will be enough to keep me awake. It’s really hard for me to convey how ecstatic we are to be doing this show. By the time we actually get into the studio, I have a feeling that all the excitement is goign to bubble over, and we’re not going to have a problem staying awake.

CORY: Colleges against Cancer and WSIN have given us a bunch of stuff to give away, like t-shirts and other fun goods. And we’re giving away prizes closely associated with their respective games as well. So, we’re giving away a teapot for the Countdown winner, a bowl for the Mastermind champion, and absolutely nothing for whoever wins Just a Minute.

CORY: When you have a 24-hour live radio broadcast, anything could happen, so there are plenty of unsurprised plans. I know that we’re doing some special things to make some shows—which are traditionally half an hour—fit into one hour. I think people will be surprised.

CHRISTIAN: I can say with confidence that there is at least one pleasant surprise planned for the broadcast. 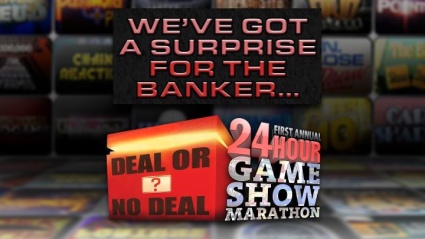 RHM: You’ve chosen American Cancer Society as the charity. Do you know anyone with cancer?

CHRISTIAN: My grandmother in Puerto Rico had a cancer scare recently. Thankfully, everything turned out alright, but I know that some people aren’t so lucky. I also have some friends with relatives who either have or have had cancer.

CORY: I hope that your readers dig deep and donate to us. We’re doing this as game show fans and as people who aren’t fans of cancer. We hope this raises awareness and funds for the American Cancer Society,
along with a bit of entertainment as well.

CHRISTIAN: What Cory said. We’ve put forth an enormous amount of time, effort and love into this project, and we’d love to see our work translate into big money for ACS. We want to have as much fun as possible, but at its core, this show is for those whose lives have been affected by cancer. We’re doing this for them.

Thank you, Cory and Christian! Give the Game Show Marathon guys a message, whether it’s a your cancer story or well wishes, by calling 224-244-7476.

Full list of games of the 24 Hour Game Show Marathon: