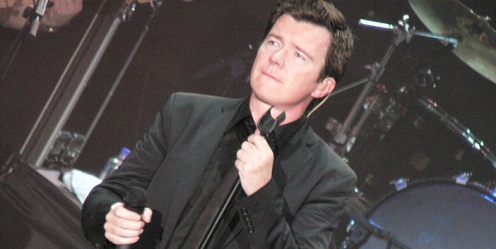 Challenge: write a complementary profile of the star crooner and father of one.
Difficulty: as few references to Rickrolling & “Never Gonna Give You Up” as possible.

First, a personal message from Rick to Anggi and Indi. As one YouTube commenter astutely noted: “You wouldn’t get this from any other guy.” 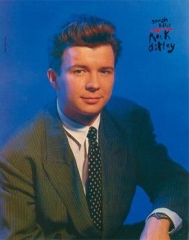 Whenever you need somebody
and are making a cry for help,
here comes a bigger Internet
success story than Yelp.

I avoid loveless internet trolls.
Oh, how I go down your songlist
with such a speedy scroll.

Hopelessly, I move right out.
When Mr. Astley is on the stereo,
baby, it’s lights out.

I hate giving up on love.
Sleeping lonesome? Never!
With the help of the great Rick Astley,
his music connects us together forever!

As you have seen, writing something biographical of Rick is simple. What’s inseparable is making a coherent essay about him and skipping “Never Gonna Give You Up.”

Donkeys of the Day: In our ongoing coverage of mules, donkeys, and their kin, this is what a Internet meme backlash might sound like:
[tube]http://www.youtube.com/watch?v=Ac2yP_DbHxc[/tube]